by Hitesh Malviya
in Cryptocurrency, News
0 0
0

A hard-fork is what happens when the community of one coin splits into two based on some functionality or feature of the coin. This has happened n number of times in the cryptocurrency market and is become quite common. In fact, many old timers in the industry believe that altcoins too are nothing but hard forks from the first cryptocurrency; Bitcoin with minor modifications.

The most recent one that has the cryptocurrency market divided is the Bitcoin Cash hardfork. The original Bitcoin Cash blockchain has been split into two and there is a huge performance competition. Here is what happened.

Bitcoin Cash has a scheduled hardfork twice every year. The aim of the hardfork is to essentially update the network and add newer features to improve the performance and feel of the network. But right before this year’s hardfork, there were many conflicting ideas that were proposed, one of which went outside the premise of Satoshi Nakamoto’s whitepaper.

The part of the community responsible for this split of Bitcoin Cash wanted to directly address the scalability issues that Bitcoin and multiple other altcoins are facing right now by increasing the block sizes of the blockchain. By doing this, this sub-section of the Bitcoin Cash community believes that Bitcoin will be able to reach its full potential as a transactional currency rather than an investment option or turning into a type of stake or stock in a larger company or project.

The other part of the Bitcoin Cash community objected to this vehemently. Saying that doing so will only dilute Satoshi’s vision for the cryptocurrency market and that the block’s size should remain the same and scalability should be attacked a different way. This part of the community believes that the changing of the fundamental unit of the blockchain is not the way to go.

Because the Bitcoin Cash community couldn’t reach a consensus based on what they knew and everything that they had found out, the Bitcoin Cash blockchain has now been split into two and this has sparked a slight battle between the two.

The Bitcoin Cash community has been split right down the middle because of this difference in opinion. While some people want to change the blockchain, others want it to remain the same. Because of this lack of consensus, the bi-annual hardfork that happens has taken a different turn and become one of the most fueled hardforks the community has ever seen.

With the implementation of the second hardfork this year, Bitcoin Cash is now of two different types;

With this lack of consensus and the split that the hardfork has inevitably brought on Bitcoin Cash, the blockchain has been split into two. One for BCH ABC and the other for BCH SV. And because this routine hardfork has turned into a splitting of ways and ideologies the two are being pitted against each other and has sparked quite the war.

The two investors; Roger Ver and Craig Wright have taken upon themselves to make sure that their ideology and school of thought wins over the other. They intend to do this by comparing hash rates and competing for the BCH banner on all exchanges. Currently, the hash rate for Bitcoin Cash as a whole is quite high and is increasing as well. This is because both sides are concentrating on mining their coins as fast as possible.

Along with this highly technical war that is happening, another one is being conducted on a different front. And, surprise surprise, it is on Twitter. Both investors have been goading each other on Twitter and have decided to continue the competition till the other one (idea/coin) ‘dies’.

Roger Ver has also said that he will be diverting BTC’s hash power over to BCH ABC so that they can get ahead of the other side, after calling Craig Wright ‘relentless’. Roger Ver then also notified everybody that the value and price of Bitcoin may crash because of this and may even fall below proposed support lines that the cryptocurrency has for itself. And it has done just that. Bitcoin is currently dwindling over the support line at $5,452 USD.

Though the battle is being fought on multiple fronts, the most entertaining of them is the one happening on Twitter at this point. But the proof of the pudding, at the end of the day, is in the higher hash rate. And, at the time of writing, BCH ABC has been in the lead with time to spare. 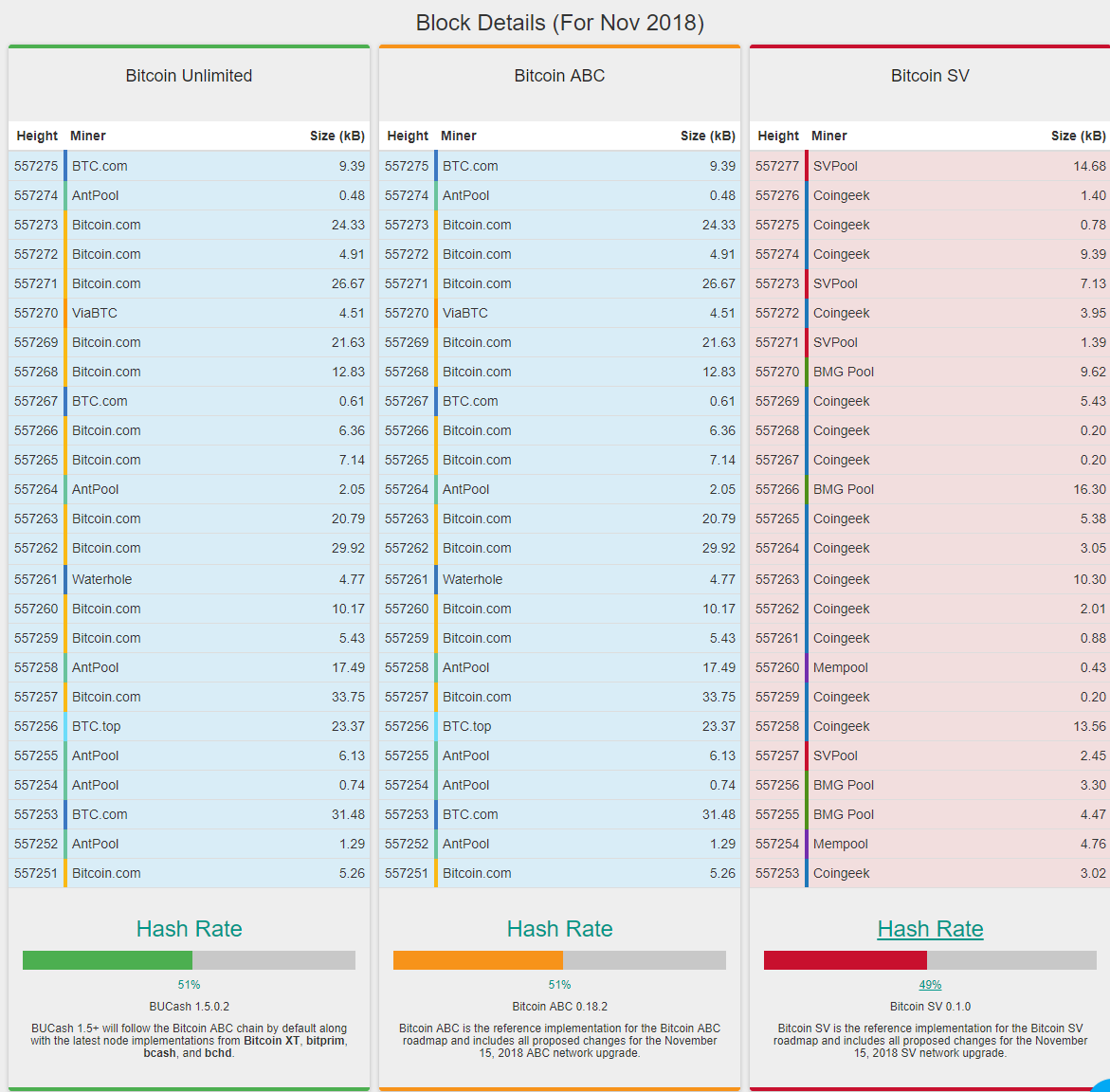 While the conflicting ideologies are being headed out and handled by two of the big names in the cryptocurrency market; Roger Ver and Craig Wright, there is a larger community behind them that is also leaning towards each of them, respectively. At this point, because of the hash rate, it is becoming more and more clear that BCH ABC is going to come out on top.

But there are a lot of people in the community that have large sways on it and quite a few exchanges that have also aligned themselves with their groups. Exchange companies like Binance have aligned with BCH ABC and so has Huboi and other big names in the exchange community.

But by the looks of it all and the way the hash rate reports are coming out, it is becoming more and more evident and apparent that BCH ABC is in the lead and it has been given the most support from exchanges as well. Some exchanges, on the other hand, have taken a neutral position on things and have vowed to decide later by suspending BCH transactions until the hardforks are over.

The hardfork that BCH is undergoing right now has the makings of one of the most industry-fueled forks in the history of the cryptocurrency market. It has everyone’s attention and at this point, it is quite clear which side will win. But the amount of fever with which this hardfork has caught everyone’s attention is unlike the ones before. One of the downsides of this hardfork is that the cryptocurrency market and the value of Bitcoin is on a slight decline.

This hardfork is also one of the most high profile ones. With Roger Ver and Craig Wright at the cusp of it all. But by all signs, indications, and means, it is quite obvious that Roger Ver’s BCH ABC is going to come out on top.

A Detailed Overview of EIP 1559: What to Expect

Bears no longer in control as Grayscale is set to release 16,000 BTC worth over $625M

Bears no longer in control as Grayscale is set to release 16,000 BTC worth over $625M

Be warned! Hackers are abusing API keys and stealing your funds

Mistakes to Avoid When You Want to Earn Crypto Interest