by Hitesh Malviya
in bitcoin, ethereum
0 0
0

Both, Ethereum and Bitcoin, pulled all eyes towards themselves as soon as they were launched. The credit solely goes to the novelty of technology used. However, it is, now, crucial for the fintech industry to closely observe the difference between these two technologies. 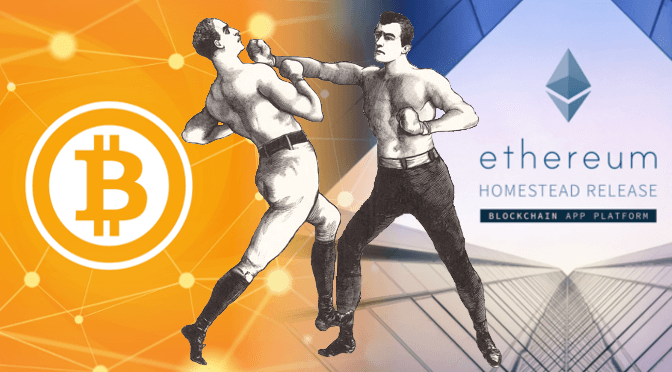 It is a cryptocurrency and digital payment system. The technology was mysteriously presented in a whitepaper by Satoshi Nakamoto. Bitcoin is one of the largest currency of its type in terms of total value in the market. Bitcoin is regarded as the first digital currency, although certain (unnoticeable) trials were made prior to its launch.

Bitcoin mining is popular among enthusiasts. In this activity, Bitcoin is rewarded to the users when they offer their computing power to record and validate transactions. Besides being mined, Bitcoin can also be used as exchange currency or for regular transaction purposes.

Bitcoin is not yet accepted as a formal tender of transaction or storage of value. But, over years, it has created a niche for itself and continues to be a part of the financial system, despite of being repeatedly debated.

Ethereum is a blockchain-based open source distributed platform for creating Decentralized Applications over smart contracts. The technology produces peer-to-peer contracts using Ether as token.  Smart contracts, on the other hand, are applications that can facilitate, check and enforce the negotiation or performance of a contract.

Ethereum has a far-fetched range of applications, majority of them revolving around Ether. Ether is a like a transportation system for traversing around the Ethereum platform.  Ether is sought after by developers for 2 reasons-

-for being used as a medium of ex-change, just as other cryptocurrencies.

-for running applications (and monetizing them) on Ethereum.

Differentiating between the two

Both Ethereum and Bitcoin are backed by the distributed ledger technology. Still, they are different in many technical ways. Some of these are briefly listed below:

In nutshell, Ethereum is an advanced technology designed using blockchain, which in turn supports Bitcoin. Ethereum has no purpose of competing with Bitcoin. Thus, Bitcoin and Ethereum are different versions of the same technology (Blockchain) that driven by entirely different intentions.

Cryptocurrency Trend: How GPU Shortage Is Affecting The Mining?

Cryptocurrency Trend: How GPU Shortage Is Affecting The Mining? Cryptocurrency has gone mainstream over the last few years, with currencies...

In this article, we'll know about bitcoin Futures (derivatives)platforms and learn how to trade on these platforms.  ‘Futures‘ is a...