by Hitesh Malviya
in Startups
0 0
0 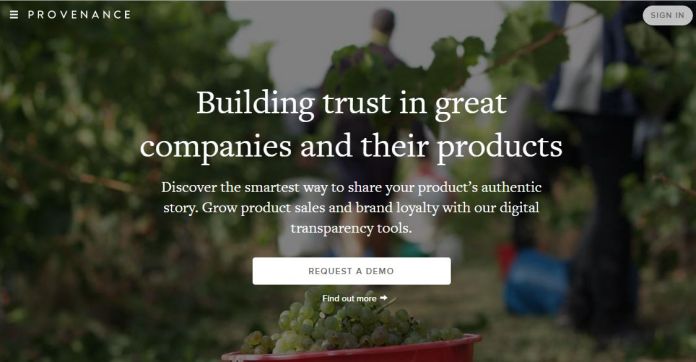 Provenance, in one form or another, has been called blockchain’s killer app. The use of blockchain as a provenance protocol is a common denominator of all use cases, whether that relates to post-trade financial assets or physical entities such as diamonds or goods on a supply chain.

A blockchain provides a shared database that’s transparent and tamper-proof. Currently, the Bitcoin blockchain is being used by a number of companies, such as Everledger, Colu, Ascribe, Monograph, Stampery and Uproov, to prove the identity, authenticity and ownership of all sorts of things.

London-based Provenance is using public blockchains – Bitcoin and Ethereum – to create a mark of trust that spans supply chains from source to consumer. The company, which is headed by computer science PhD Jessi Baker, straddles supply chain and marketing.

In addition, Provenance will use blockchains to do social good. As well as authenticity, blockchain provides a concrete way of proving something is sourced in a sustainable manner, and also that no slavery exploitation or other poor practices were involved.

Provenance, which started in 2013, is not solely about blockchains; it also works with normal databases and open data, helping companies gather information from their supply chain, such as images with location and all sorts of certifications.

“We are not looking to do a crazy amount more just yet because until we have really confirmed the system works as a whole. Although we have really enjoyed working very closely with Ethereum, and we do have some blockchain developers on our team, but we are not trying to massively reinvent the wheel in terms of how blockchain development is done. We are just trying to solve a problem really and blockchain is a means for use to do that better,” Baker said.

Towards the end of February, Provenance will announce a string of partnerships, including some big name retailers. Baker said the announcement will include “quite a few specifiers and a couple of group owners and a couple of quite famous restaurants that we are working with on this. Plus a lot more have got in touch, so that’s exciting. I think we will be quite busy this year.”

When it comes to very big supply chain players like supermarkets, Baker acknowledges that they are already trying to track products and are doing it quite successfully about two tiers away from the retailer. “But when you start to get right down to the grass roots, to origin, raw material – the man in boat or the man in the field – it’s being done very poorly. And that’s often because it is the guys further down the chain that are funding the whole thing.

Lisk plans to launch a modular cryptocurrency which it says would satisfy the growing interest to use the blockchain as a...

Why you should buy Tezos (XTZ)

How will the Ripple IPO affect the price of XRP?

Why you should buy TRX (Tron)?