Digitex Futures, a blockchain startup, started its journey in the first quarter of 2017. The underlying principles of the team and the final aim of the company are clearcut and simple. Digitex Futures is a futures trading exchange that has its own native currency called the DGTX token.

The exchange that Digitex Futures is building is a commission-free futures exchange for the cryptocurrency market. The company aims to eradicate the currently well-established structure of transactional cost from its system by covering operational costs of the exchange. The exchange aims to cover operational costs of the users by mining its own native currency, the DGTX token, instead of having to levy a charge on all transactions which in turn hassles the users on the exchange.

Digitex Future, the exchange, has broken away from many of the norms that are there in exchanges in the market at this point. Exchanges, in principle, promote a decentralised way of the internet and financial services but themselves have a large index of centralisation. The centralisation that creeps into exchanges come in terms of the accounting and checks and balances of the exchange. Because at the end of the day, it is a matter of money exchanging hands and assets being bought.

To tackle this particular problem of centralisation that is common to most exchanges in the market at this point, Digitex Futures has converted the accounting and checks and balances into a smart contract on the Ethereum platform. The smart contract acts as an independent, decentralised source on the Ethereum blockchain that is in charge of the accounts of the exchange. Thereby removing all semblance of centralisation from the exchange platform.

The edge that the Digitex Futures exchange has over the other exchanges in the market is that currently a lot of trading practices that are there and have been brought over from the stock market cannot be used on them. This is because of the large transaction costs that the user has to foot the bill for. But since Digitex Futures is going to be a commission-free exchange, a lot of these strategies and trading routines can now be put to the test in the cryptocurrency market without being shackled by the transaction fees.

Overall, while the project is ambitious in nature and scope, it is something that will increase the cryptocurrency market’s horizon by a lot. Introducing the commission-free trading and futures trading at the same time will and has so far paid off for the company because it hit two weak points of the market at once and has come up with a feasible solution for both. The exchange and platform are said to be ready and open for business by the end of the year.

Digitex Futures, the company, was formed in 2017. Since then the company has had its work cut out for itself. The company has reached all of its milestones on its roadmap so far and has the biggest one coming up this year.

The final milestone step of the Digitex Futures company is to launch its exchange and open for business. And that is set to happen in Q4 of 2018. If the past is a sign of the future, the company will keep up its word and the cryptocurrency market and community will ring in the new year with a brand new futures trading exchange.

In the partnership arena, however, the company does lag behind. In its, almost, two years of existence, the company has not announced any big-time partnerships or hasn’t even rumoured to make one. But what the company lacks in partnerships, it makes up for in advisors. The advisory panel of the Digitex Futures company includes Tokenpot Capital’s founder; Mickael Salabi.

The DGTX token is the native token of the Digitex Futures exchange and platform. The token is the cornerstone of the company’s aims. The exchange is achieving its commission-free status by mining the DGTX token to cover operation costs and eradicate the transaction fees from its platform.

The DGTX token is an ERC20 Standard token and is a typical Ethereum token. Once the exchange launches it is expected that the coin will be listed in all the exchanges that support Ethereum tokens and then some. The DGTX ICO sold out in seventeen minutes. Which is a speed that just goes to prove how long time coming this project actually is.

The token’s current value is $0.14 USD. The DGTX’s all-time high is $0.15 USD. And is currently trading on two exchanges; Mercatox and Exrates. 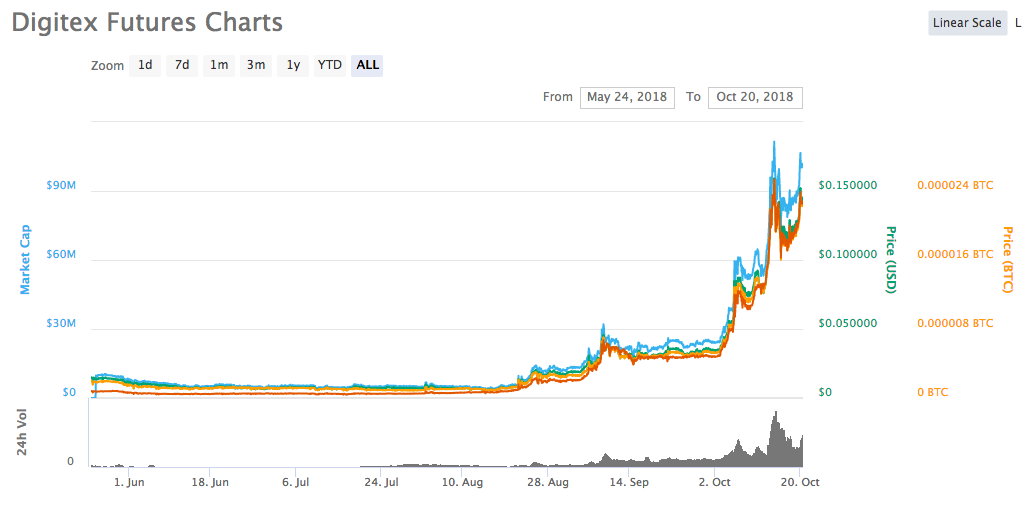 Must Read: How to Find an Altcoin Bottom and Uptrend

Crypto trading bots can be defined as automated software designed to help you buy and sell cryptocurrencies. They help the...

The Best Altcoins To Buy in March 2021 – Part 1 The last month was great for the crypto market,...

Overview of NFT Crypto Projects NFT crypto projects are all the buzz in the digital space right now and for...

Top 5 Hidden gems Crypto Everyone Should Know About It is very easy to get lost in the crowd in...

Tronsquire: A Million Dollar Scam on Rise In India which promises up to 1000x Returns on TRX

NBA Top Shot: What’s All The Buzz About?