Hello, reader! We are starting a new series called Crypto Gems, in which we will cover projects that exhibit solid fundamentals, but are yet undervalued in price. We are starting the series with a fairly exciting blockchain project – Conflux Network. Let’s dive in.

Ever since blockchain started to revolutionize finance, a majority of these have been bogged down by the classic trilemma – Scalability, Security, and Decentralization. It feels like a vast majority of the platforms in the DeFi space could satisfy only two of these criteria. While there have definitely been multiple attempts, to solve these problems – scalability always seems to come at the cost of decentralization. However, there are some projects like the Conflux Network, a PoW blockchain, which promises a huge potential to solve this trilemma.

While the Conflux network does function using a similar Proof of Work protocol as Bitcoin – it processes transactions parallelly (as opposed to serially like in the case of Bitcoin) by deploying a unique DAG (Directed Acrylic Graph) structure. This ensures that Conflux can practically achieve 4000 TPS without sacrificing security or decentralization. Conflux claims to be the only “public, permissionless” blockchain endorsed by the Chinese government. Let’s take a deep dive into this project.

Originally from the research lab of Dr. Andrew Yao (Turing Award Recipient) from Tsinghua University. They aim to solve the blockchain trilemma with what they call “a novel Tree-Graph Consensus Mechanism” (more on this later). The Conflux Foundation (A non-profit foundation with the sole ambition to develop the ecosystem) was found in 2018, and soon after it became the only state-endorsed, public, decentralized permissionless blockchain in China. Since then Conflux has expanded its global operations and community with over 50 members spanning four continents (from America to Africa).

The Conflux Network is founded by four prominent individuals – Fan Long, David Chow, Yuanjie Zhang, and Ming Wu, joined by advisors Eden Dhaliwal, Andreas Veneris, and Andreas Park. The team consists of the best and the brightest in the field, including graduates from the Massachusetts Institute of Technology (MIT). Carnegie Mellon University, Tsinghua University, and the University of Toronto.

The Conflux Network powers multiples tools, protocols, and applications, including – Conflux DeFi, ShuttleFlow, Dual Protocol, ConfluxScan, ConfluxPortal, ConfluxBounty, MoonSwap, MoonDEX, Flux, Tspace, and Ins3. The network utilizes a Turing-complete smart contract (to help build dApps on the network) and the native token (CFX) along with its implementation of a DAG structure to tackle the blockchain trilemma.

The DAG consensus structure, also known as the Tree Graph Structure, is the consensus algorithm working in tandem with PoW to improve scalability. DAG takes a decision by answering two specific questions

Once DAG determines that a block is valid, and accepted into the protocol, the blocks are arranged as a tree–graph. Each block possesses two ends – a parent edge (attached to the parent block) and the reference edge (referring it to future blocks),

Once the blocks are organized, Conflux utilizes a technology called Greedy Heaviest Adaptive SubTree (GHAST) to assign weights to the different blocks in the DAG. The pivotal chain (the most stable chain from the genesis block to the parent chain) is decided on whichever block has the highest weight.

From the parental edges, pivotal chain and reference edges fork into reference blocks. Each block can be traced to the pivotal chain, through parental edges and reference edges. This way, a sequence is determined by the participants in the network, and transactions are processed accordingly. This way, duplicate or conflicting transactions are deemed invalid and are ignored. This results in a high throughput, as the network can generate blocks faster, and forks are not destroyed, and high utilization of block space.

While there aren’t many blockchains with nearly as successful results, the Polygon (Matic) network also attempts to solve the same problems as Conflux. However, the two platforms approach the problem in completely different ways. While Polygon uses a multichain, layer-2 PoS blockchain, Conflux utilizes a PoW blockchain, along with the unique Tree Graph structure, and a Turing complete smart contract. Apart from this, the Conflux Network will also face competition for its protocols from DEXes, Swaps, and other DeFi platforms. The Conflux Network promises to be a revolutionary platform, and it’s definitely something to keep an eye out for.

CFX is the native token powering the Conflux ecosystem. The total supply is locked at 5 billion and is gradually released into circulation by the Conflux Mainnet. The tokens can be utilized for staking and as a means for voting to participate in network governance. While the whitepaper did announce a certain unlock schedule, the schedule is recently revised, and will not be triggered forthwith.

Founded in 2018, Conflux has raised $35 million via a private token sale from prominent investors in China, including private equity firm Sequoia China, Huobi Group, Shunwei Capital, and Rong360.  Conflux has also received an over $5 million research grant from the Shanghai Science and Technology Committee and Xuhui District government, which is part of the city’s municipal government.

The Future of Conflux 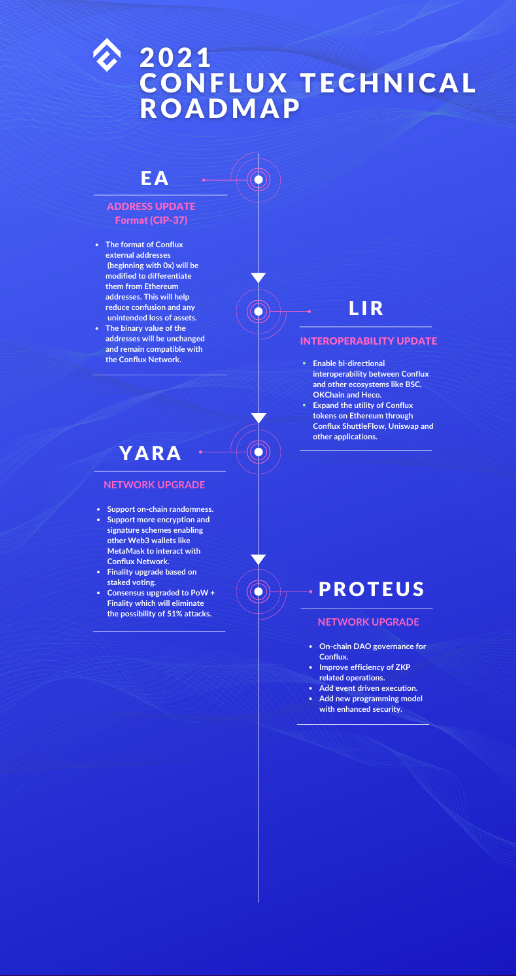 The Conflux team is currently three years into development and has plans to work on External Addresses, Interoperability, and Network upgrades over 2021. Recently, from April 21st, a 1-week long yield farming campaign from the MoonSwap team garnered the attention of many, with rewards in CFX and cMOON, under MoonSwap’s new “Galaxy” farm.

Into its third year, Conflux has covered a lot of ground since its inception. Conflux’s plan to “fix” Ethereum’s scalability issue with a unique DAG consensus algorithm, is surely a stroke of genius. However, as other platforms are coming to light with seemingly better solutions to solve the same issue, only time will tell if Conflux is able to truly deliver on its visions – to successfully build a scalable, decentralized, and secure blockchain in the DeFi space.

Cardano is now the third most valuable cryptocurrency with a market cap of over $80 billion. Its native token- ADA,...

As the crypto market grows, perhaps the most exciting aspect of it is DeFi and particularly, DEXes. In that context,...

Nervos Network: An Open-Source Blockchain Protocol With PoW at Its Core

The Nervos Network is an open-source public blockchain platform and a collection of protocols. The protocol was formed with the...

The Best Altcoins To Buy in August 2021 – Part 1 The last month was decisive for the entire crypto...