In what seems to be an April Fool’s prank, Vitalik Buterin, the founder of Ethereum, has managed to convince everyone about the market hard cap for its coin Ether. Here is the series of tweets under the founder’s official Twitter handle that state that the announcement that was made was actually an elaborate joke; 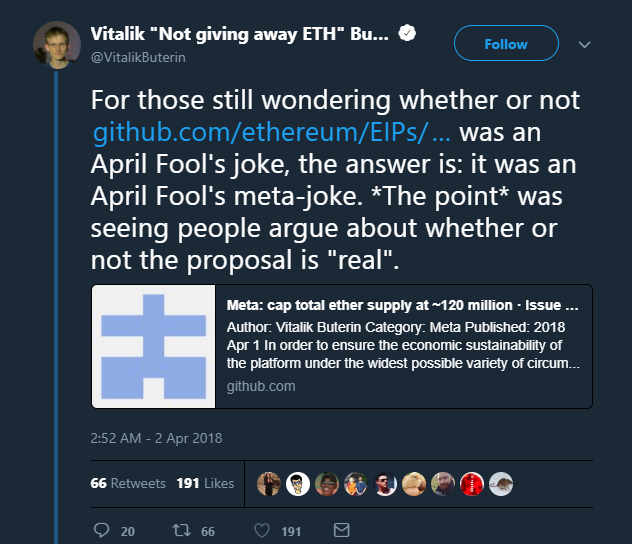 After which he went on to say that in the event that setting a market hard cap for Ether is something that community wants he is open to it; 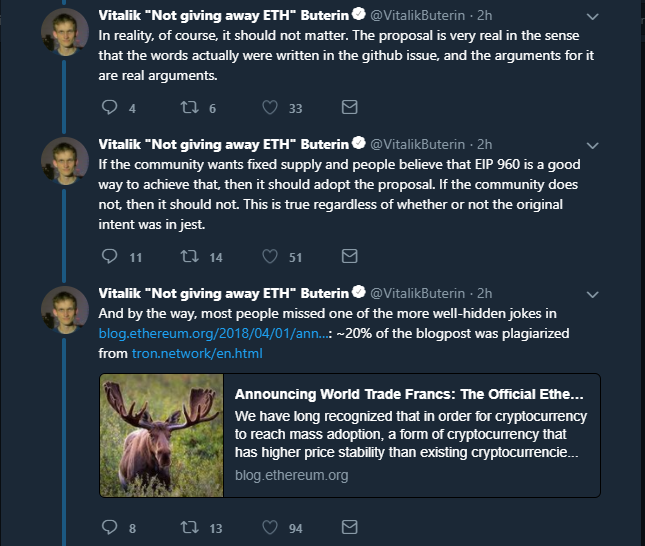 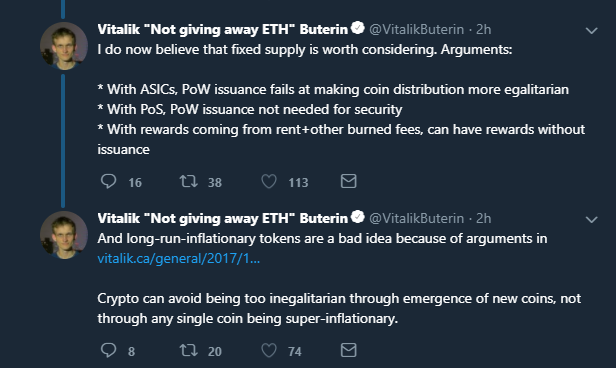 Vitalik Buterin, the founder of Ethereum, has announced, amidst a massive drop in value, that he is considering the possibility of setting a 120 million market hard cap for its coin Ether, on GitHub on the 1st of April. Though the timing at which the announcement of this new possible plan came at an unfortunate time, it is not a joke and Buterin is very serious about setting the 120 million hard cap, which incidentally is double the amount they sold in the original sale in 2014.

The announcement was posted as a part of its Ethereum Improvement Proposal on GitHub and though the proposal contains no indication of when the hard cap will be enforced, the founder said that it is imminent and will most probably be a part of the next Casper update.

Buterin, in the proposal, justifies this line of thought with the following reasoning;

“In order to ensure the economic sustainability of the platform under the widest possible variety of circumstances, and in light of the fact that issuing new coins to proof of work miners is no longer an effective way of promoting an egalitarian coin distribution or any other significant policy goal, I propose that we agree on a hard cap for the total quantity of ETH.”

Buterin also added later that in case the proposal is acted upon after the next Casper update, the next logical hard cap for the coin would be 144,052,828 which incidentally is the double of what they made in Ethereum’s genesis block.

The founder also went on to dissuade the miner’s concerns about the decline in the rewards that they will definitely see with a finite number of Ether coins in the market. He said that the step he is proposing is necessary and the consequence of not having a hard cap, would be the decline of value.

The Ethereum Improvement Proposal that was announced by the founder on GitHub is merely a proposal and there are just as many chances that they will not take place, as there are there that it will. The announcement is one of its kind because this is the first time the crypto market has heard from any of Ethereum’s officials about the company’s monetary policies.

Another thing that stood out in the proposal that Buterin uploaded on GitHub was that it neither contained nor indicated to any sort of timeline for both the enactment of the hard cap and the Casper update.

Ethereum in the past has been criticized for not having set a market cap and has been repeatedly told that the decision not to, dims its advantages as an investment. And given its massive decline in value, it should come as no surprise that Buterin and his team are looking at options to improve the stability of the coin.

There is no telling whether Ethereum’s core development group and investors will approve of the changes that Buterin has suggested in the Ethereum Improvement Proposal, but if they do, the enactment of the market hard cap is imminent and will have its founder’s full support. The announcement, though it contains at this point only what can be amounted to a bunch of suggestions, is very significant and may just encourage more investors to consider Ethereum. But whether or not the changes Buterin has suggested will be enacted, is something only time will tell.

What is your take on the founder’s proposal?