A breakdown of Ethereum 2.0 Serenity roadmap

by Hitesh Malviya
in Cryptocurrency, ethereum
0 0
2

In July 2015, Ethereum was born. Launched by Vitalik Buterin, this smart contract platform is now the second-largest cryptocurrency by market cap. With thousands of decentralized applications built on the network, Ethereum’s growth has been exponential over the last four years. As we move closer to the Ethereum upgrade to ethereum 2.0 , let’s take a look at a breakdown of Ethereum 2.0 Serenity road map which will pave the way for ethereum 2.0.

Why the need for an update?

Despite Ethereum’s success, it faces monumental scalability problems that pose a challenge for dApp developers on the platform. Ethereum was originally built on a PoW (proof-of-work) consensus algorithm, the same as Bitcoin. With the Serenity upgrade, Ethereum will move over to a PoS (proof-of-stake) algorithm, which will hopefully eliminate the scalability issues, and improve speed and security on the blockchain. For context, Visa currently processes around 45,000 transactions per second while Ethereum can only process 15. 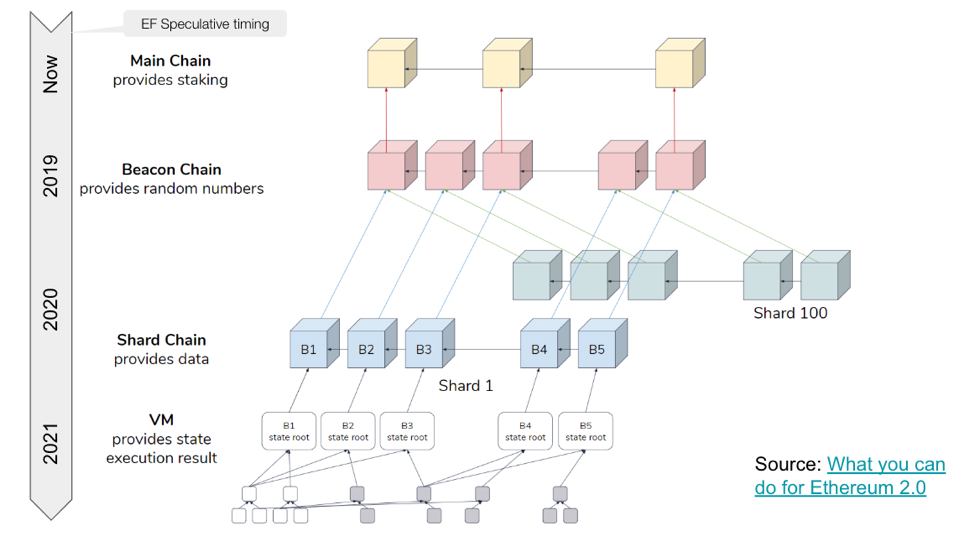 The Ethereum Wiki outlines seven phases to the Serenity upgrade.

The first three phases of the Ethereum upgrade will likely be implemented by 2021, while the remaining phases are still quite up in the air. It’s likely that they’ll be implemented over the next few years.

Now’s the best time to get into trading Ethereum. The update will most likely see a surge in prices, and could unlock up to $16 million in crypto activity. Why not give CFD trading on a platform like eToro a try?

Why is this important for investors?

What’s really important for investors in Ethereum to know, is that the Serenity upgrade is a radical overhaul of the entire network. According to a report from Kyokan, the first three phases will likely take a year and a half to complete. Look at a breakdown of Ethereum’s Serenity road map, it’s clear that we’re not going to recognize Ethereum in the next few years. With so many changes planned, Ethereum as we know it will be a distant memory and what will replace it may be the greatest blockchain on the market. Who else is looking forward to the Ethereum upgrade?

(In this Guide, We've explained Ethereum Rollups, How they can scale Ethereum, and their different types.) https://www.youtube.com/watch?v=QWxnzr6eNm4 ROLLUPS EXPLAINED Ethereum...