For the first time in 2018, Bitcoin has chalked a new all-time low. In the span of a couple of hours in open market yesterday, Bitcoin fell below $5,600 USD.

It was not the only Bitcoin that booked a loss, all the top cryptocurrencies saw double-digit losses yesterday in the same window of time.

According to reports and charts, these coins started falling around 10.30 am UTC and finally stopped around 12 pm, on 14th November. But only after the coins had all booked a significant loss.

The dip in the market and the losses that these cryptocurrencies have booked in the past day, specifically during these hours, is being attributed to a massive sell-off by the community in response to some news or rumour, still remains unknown.

Among the top cryptocurrencies, the following have harboured losses of over 10%: Bitcoin, Ethereum, Bitcoin Cash. The cryptocurrency market’s market capitalisation has also taken a huge hit and fallen down to around $187 billion.

This bearish market was predicted by many key investors in the cryptocurrency market. In fact, they have gone as far as to say that the bear market will last a long time now. Saying that it is likely to go on until the second quarter of 2019.

The same key investors have hinted that the market will only recover post-Q2 2019 if and when industrial investors join the market. 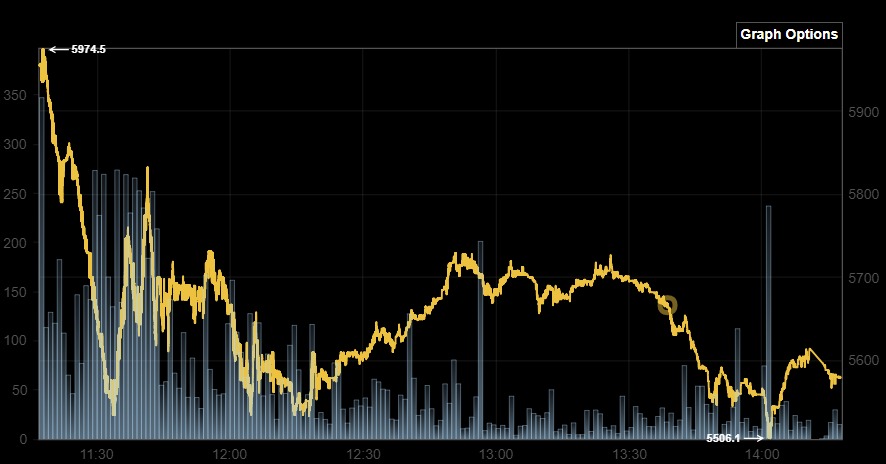 While the top cryptocurrencies have booked double-digit losses in the last day and the market’s total capitalisation has taken a hit, there is a silver lining.

Even though Bitcoin has also faced hits like the rest of the cryptocurrencies in the market, it has grown in dominance. Bitcoin dominance in the market right now is up by 2% and is at 54% right now.

If we are to go by the predictions of investors and general projection of the market, it is clear that this first batch of sell-offs was just the first in a line of many to come. It will take some time to recover and it may even go beyond Q2 of 2019.