by Hitesh Malviya
in Uncategorized
0 0
0

Eden is one of the projects which got a lot of attention a few weeks ago. Recently they have announced that they are going to release 2 MVPs by the end of April before they conduct their ICO. The first one is E-Explorer which is a web-based block browser that allows you to browse Eden’s block information. With E-Explorer, anyone can easily retrieve and view information about Eden’s blocks and transactions.

E-Explorer is designed so that it can be intuitively used without any existing knowledge and by the general public as well as developers. Eden has also implemented functions within the E-Explorer to obtain detailed information whenever related data such as block, batch and transactions are clicked on thereby allowing for more connectivity. 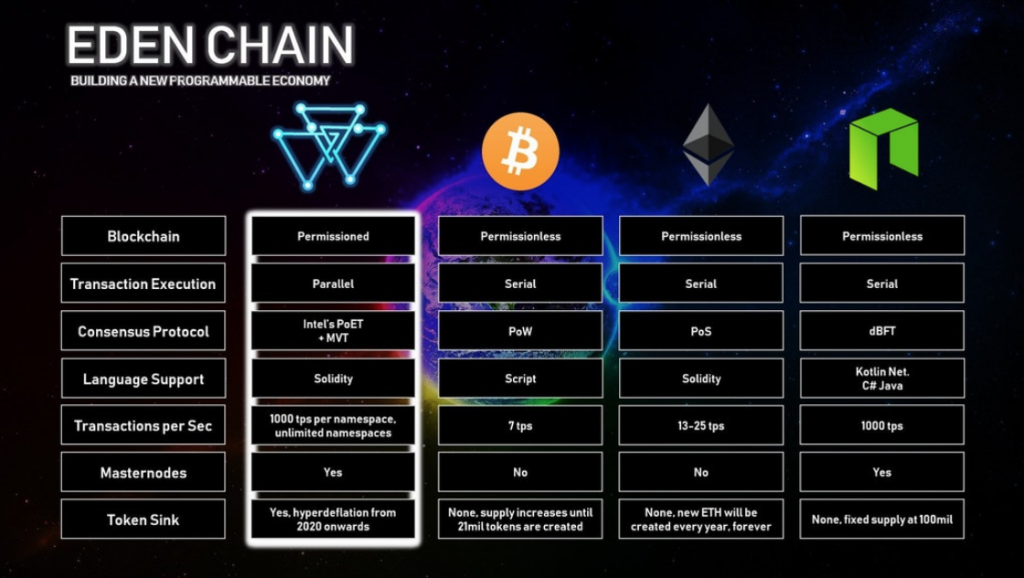 Eden also announced recently that they have joined the Hyperledger community. Hyperledger is an umbrella project of open source blockchains started by the Linux Foundation, to support the collaborative development of blockchain-based distributed ledgers. Eden makes it easier for enterprises and businesses to access blockchain. Enterprises need to have a strong technical team to build on Hyperledger. However, Eden makes it easier for developers to take the advantage of a permission blockchain through the use of SDKs and APIs, thereby making it easier for enterprises and businesses to adopt Eden as their blockchain platform for tokenizing their assets and services.

One of the biggest announcements by the team was Eden will have Masternodes from Q3 2018. All details related to Masternodes will be released at that time including the minimum number of tokens that would be needed to start a masternode. In addition to that, it has also been stated by the team that from 2020 onwards there will be hyperdeflation with transaction fees being burnt. An article by Eden’s CEO, James Ahn was published in the April issue of TECH M, a magazine in the field of industry and science, published by Money Today where he talks about the scalability issues of current blockchains.

Eden is on track to deliver its MVP later this month and its testnet results will be available soon. Considering that they are targeting the enterprise blockchain-adoption market and the founder is a very well known figure in the blockchain space in Korea and is connected globally, we believe Eden would be one of the hottest projects to watch out for in 2018.

Round A of the Whitelist process with a cap of 5000 KYC was over just in a few minutes due to extremely high demand. However, KYCs will be reopened again after consideration from Eden to allow more people from the community to participate in its crowdsale.

Whitelisting for crowdsale opens on April 22, 7 AM UTC, Number of slots available: 3000

Join the Eden Telegram: https://t.me/edenchainio to stay updated on the whitelisting process.

Bitcoin cash Price prediction: to hit 350$ by next week

Bitcoin Cash is getting all attention to what it needs lately. Bitcoin cash benefitted the most from BCHSV Delisting Chaos....

Cryptocurrency is the new exciting technology at present which is poised to disrupt the way the financial transactions take place....

Blockchain technology, especially in the form of cryptocurrencies and digital assets, is already extremely popular and widely used across the...

Do you think it is an impossible scenario seeing Litecoin, the fifth most popular cryptocurrency, going from its current price...