India is not Banning Cryptocurrencies – Stop this FUD

Speaking about cryptocurrencies, Arun Jaitley, the Finance Minister of India, just concluded the announcement of India’s 2018 budget, where he said, and we quote,

““The government does not recognise cryptocurrencies as legal tender or coin and will take all measures to eliminate the use of these cryptoassets in financing illegitimate activities or as part of the payments system,” Jaitley said.”

He further went on to say that the government will keep exploring working on the blockchain technology.

But leave it to mainstream media to do a half-assed job of reporting it. Here’s what the country’s top news publications reported. We first start off with The Economic Times – 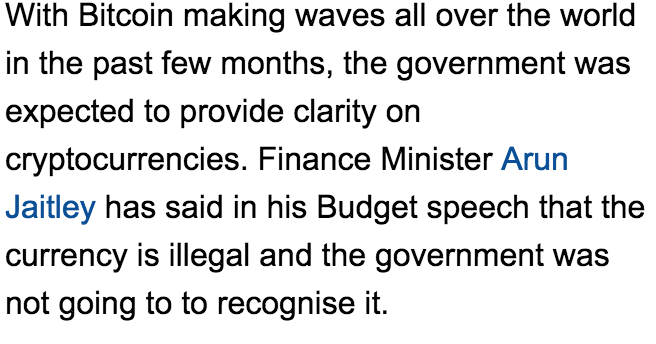 Then there was NDTV –

At this point, I’m at a loss for words. He never said that! And then, there was the Quartz –

Live Mint wasn’t late to the party either –

For years now, the Indian government has maintained the same stance for cryptocurrencies. It is not a legal tender. The same way you cannot use gold to buy coffee from a Starbucks in India, you can’t use Bitcoin to buy products and services in India.

Media in general needs to be more responsible about what they report about cryptocurrencies. The publications we have mentioned above are highly trustworthy news outlets; people take them seriously. Most new investors will sell their holdings, causing the value of the currency to crash. This is especially true for Bitcoin due to its rising popularity, and India accounts for a 10th of all Bitcoin transactions.

Dear media houses, the US dollar is also not a legal tender in India. Does that make the currency Illegal? If you took five minutes to listen to what Mr Jaitley said again, you would have heard that he said: “eliminate the use of these crypto assets in financing illegitimate activities or as part of the payments system”. Are we asking for too much?

Note for first-time investors – the media, like most people in this ecosystem doesn’t understand cryptocurrencies or its underlying technology. Get to the source and don’t trust them blindly.

GazeTV announces today the launch of its Phase 2, dubbed “Gazer-lization”, a new phase of the GazeTV project emphasizing peer-to-peer...

How to get invested early in 100X Crypto Projects In this article, I will talk about why knowledge matters in...