Initiative Q: A Scam or a Revolution?

by Hitesh Malviya
in Crypto Market
0 0
2

Initiative Q was founded by entrepreneur Saar Wilf. An experienced professional in the payments sector. Saar Wilf also had a startup that he ended up selling to PayPal for a decent amount of money. Another person that is said to have a sway in the company is Lawrence H White. Who is an economist at George Mason University and also has experience as a researcher in Austrian economics.

To increase adoption of its network, which is currently under development, the company has been giving away a large number of its tokens for free. All users need to do is give their name, email ID and get an invite from a pre-existing user to avail this offer. Its marketing at this point seems like a get-rich-quick scheme.

But the problem here is, the cryptocurrency market has seen a lot of scams and they all start and sound the same. A get-rich-quick-scheme that will go south or just a bad idea that is trying to make some noise. And one of the projects that the entire community is undecided about at the moment is the Initiative Q.

It is not uncommon for companies and projects to run introductory offers that attract users to their platforms and products. In fact, all companies do it. From exchanges to solution companies, everyone runs an introductory offer. It is one of the easiest ways to attract the community to your project and since you are starting out, it doesn’t affect your finances either.

The team at Initiative Q are doing something of the same. They are gathering user information and creating a network of users who will be interested in their network and product by giving away their tokens. For users to get their hands on these tokens, they have to have an invite from an existing user, give their email ID and their name.

The reason people are apprehensive about the Initiative Q offer is that the amount of these tokens that they are giving away is unreal. Depending on your invite, each user is being awarded a large number of Q Tokens, which at this point are worthless. The company is doing so to attract attention and users from the community and it has worked for the most part. The only downside the company now has to bear with is the fact that it has attracted a lot of unwanted attention from the community, which is now questioning whether the company is actually a scam.

The token is presently worthless and not exchangeable on any of the cryptocurrency platforms. The company is trageting future value of 1$ per Q Token, which sounds fishy here.

A large school of the community is now apprehensive about the Initiative Q. This is because, quite simply, their introductory offer is just too good to be true. It does not make sense for a company to give away so many of their tokens for free even before they have established their payment network. Another question that a lot of people have is how is the company currently affording to do so.

Here is a list of the top reasons that people are apprehensive about the Initiative Q and its introductory offer of giving away tokens for free.

To get your hands on these free tokens, the user must first get an invite from someone who is already in the network, give their name and email IDs. After which they are given these tokens. The community is apprehensive about the data protection and privacy of the company because, with an offer so lucrative, a lot of people are bound to give their information up.

As far as the distribution of the currency goes, the company loses nothing in the process. If the company goes south, the tokens become useless and the thing that the user would have lost is their data.

The user terms and conditions that everybody signs in order to be a part of this introductory offer have a lot of loose legal wording. It includes statements like “At the users own personal risk” and “subject to progress and community acceptance”, etc. Which is giving the community a reason to worry about the Initiative Q.

While these are wordings and phrases that are common to a lot of legal documents, since the community is already undecided about this project, it is not helping with the company’s credibility at all. 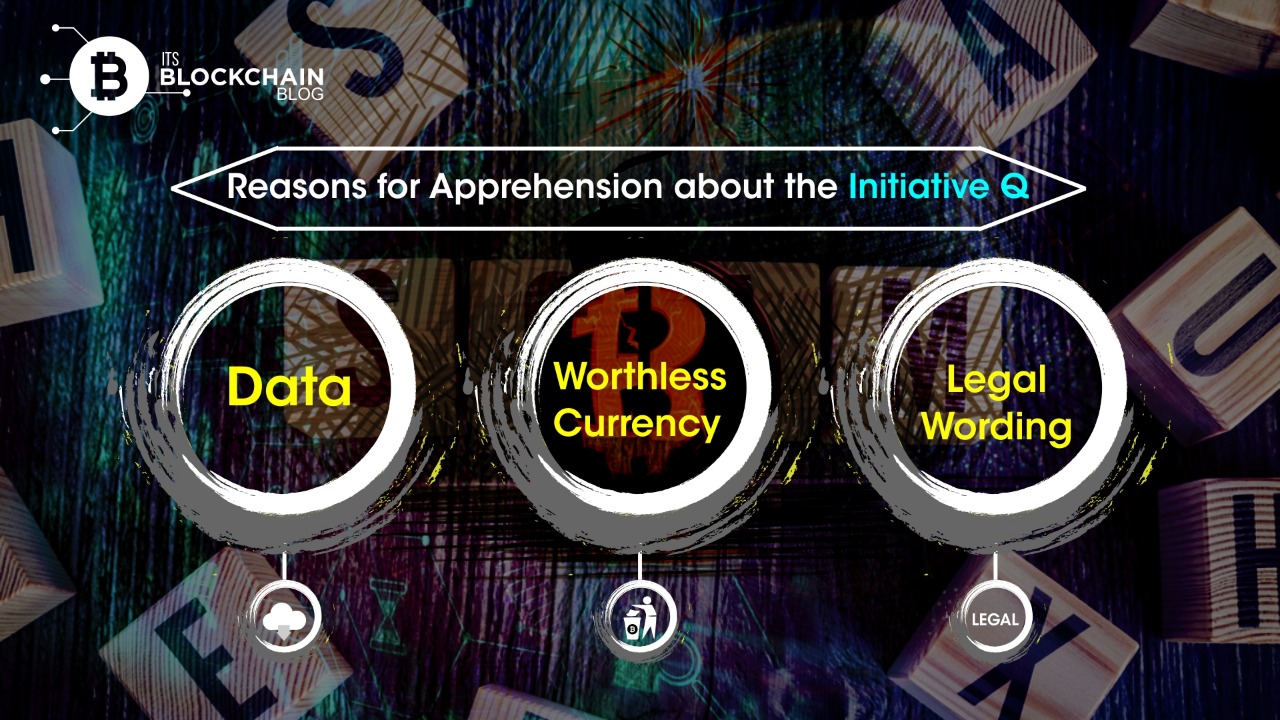 The aim of Initiative Q is to create one global currency that can be used anywhere and everywhere. The team wants to make the cryptocurrency so that it can be adopted by the cryptocurrency community first, which at this point is also a global force.

Another reason that the community remains undecided whether this is a scam or a revolution is that on the onset the company’s introductory offer looks like a get-rich-quick scheme. And the cryptocurrency community and market have fallen prey to one too many of those.

Whether Intiaitive Q is a scam or a revolution, an enforceable idea or simply wishful thinking is something that only time will tell. But the majority of the community is still undecided and for the time being, are keeping their distance from it.

What happened to Intiative Q?

There is no buzz about Intiative Q since last few months, Suudenly the self claimed 20 trillion dollar cryptocurrency project went silence after running one of the biggest quick sign up campgain in cryptocurrency history. According to the recent report by This is money website:

Given the timeline on the company’s website, which states it expects to launch from ‘late 2021 and onwards’.

One of the most recent interviews Wilf gave was to Forbes in June this year, in which he ‘admitted Initiative Q has not yet begun thinking about the interface of the payments network app, nor how it will be used by retailers and those that have signed up to the network.’

Company also provided latest update on twitter to its community in last week of 2019:

1/4
Initiative Q progress updates:
-Hundreds of thousands installed our mobile app, the first element of our future payment system
– We assembled a renowned Economic Advisory Board, to assist Initiative Q on economic and monetary matters as we get closer to launch.

According to this update – Intiative Q is still aiming more sign ups before their payment network launch which was scheduled earlier in 2019-2021 according to intial roadmap available on website.

Must Read Facebook Data Hack : Will Blockchain Be of Help?

Why is Bitcoin a safe haven in a financial crisis

In this article, we will discuss Why Bitcoin is a safe haven and how it can perform during the next...

Do you know that in 2011 Facebook issued Facebook Credits to streamline the payments for ads and games on the...

What the Top eToro Traders Are Making, and How You Can Make That Too

Trading is challenging, particularly when you’re just starting out. According to research, 96% of new traders make a loss -...