Let’s be honest. The NFT space can be overwhelming. It is challenging to track dozens of projects every day and identify the ones with the most potential. You either end up overpaying because of hype or find yourself tied to a pump-and-dump project.

The solution? Bet on fundamentally strong projects with an elite team of builders. There can be massive price swings even in the most coveted projects in the short term. But a long-term investor who sees a bigger vision than NFT profile pictures has the best possible chance to take home massive rewards.

Nowadays, almost every single project is selling out. But a sold-out NFT collection doesn’t mean it will be successful. You have to consider different factors when buying into an NFT project. For starters, the art has to be compelling. If it is not aesthetically pleasing or culturally moving, it would be hard to see collectors from other well-known communities join.

Secondly, the team has to be fully committed to delivering project milestones. Most of the newly launched collections have anonymous teams, making it easier for them to slowly rug the project. You want to see a diverse team in talent and has decent experience. Finally, the most important factor is the community. You don’t have to compare social media numbers to see which project has the best community. Instead, you need to understand the sentiment of holders and see if they are looking to flip or hold for the long term.

With that being said, our NFT spotlight series highlights the best collections currently flying under the radar. These collections tick every box of a possible blue-chip collection. It is only a matter of time. In our previous spotlight series, we talked about On Chain Monkey, DeadFellaz, and Robotos when they were at low floor prices. Look how they bounced back and made new all-time highs. For this spotlight article, we will highlight the My Pet Hooligan NFT collection. Let’s get started!

About My Pet Hooligan

My Pet Hooligan is an NFT collection of 8,888 uniquely created leporine hooligans. The artwork is eye-catching, with a diverse set of attributes and rare traits. Unlike most collections focussing on only legendary or super rare traits, all NFTs of My Pet Hooligan have something special.

The story behind this collection began when the hooligans were forced to farm carrots by living in cages built by the overlord Metazuckbot. It seems like they were taking a shot at Mark Zuckerberg. When the hooligans managed to escape, they split into seven factions. And all they wanted to achieve was to destroy the Zuck corporation.

This is where MPH’s metaverse plan kicks in. The team plans to create a play-to-earn game called The Rabbit Hole, where the players use hooligan NFTs as their avatars. The alpha version is already in development and will be out as soon as Q1 2022.

Outside of gaming, My Pet Hooligan also offers Defi functionalities with staking. Players can stake their $CARROTS and earn more passively. According to the roadmap, the team has also indicated a possible second collection. 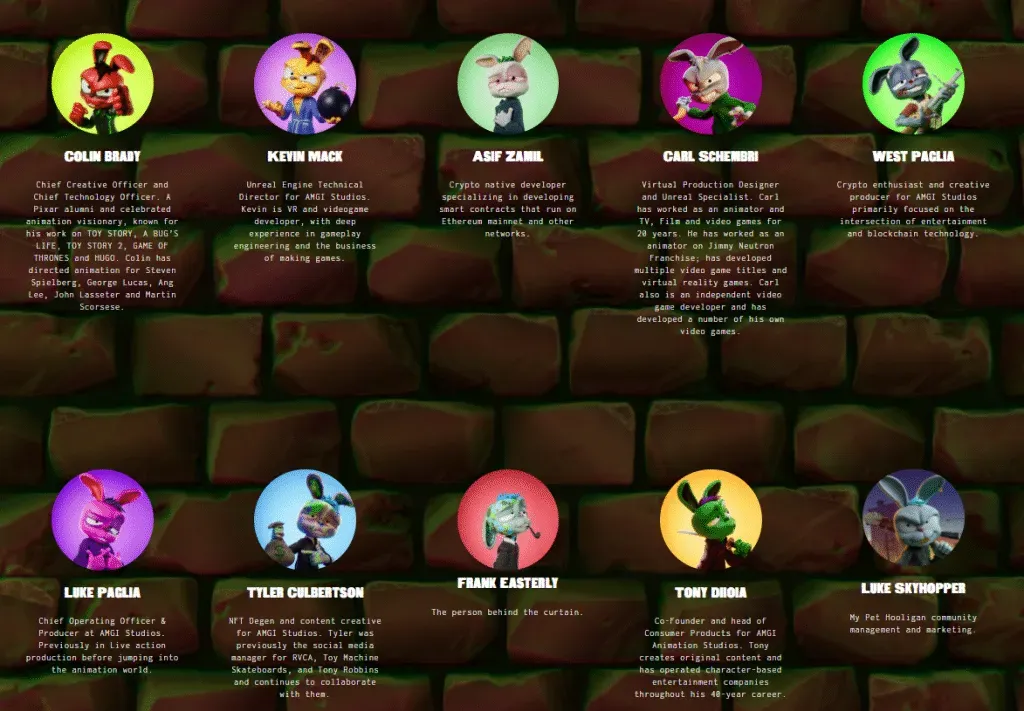 One of the reasons why we picked My Pet Hooligan for the spotlight series is their team. We usually see three or four people involved in the operations of an NFT project. But with MPH, there is a dedicated team with more than a dozen members who are highly experienced at what they do.

The team also includes an animation studio called AMGI studios. More than 15 people are working at the studio, building the game and animated content for interactive NFT experiences.

The creative person on the team is Colin Brady. He previously worked on big-name projects, including Toy Story 2, A Bug’s Life, and Game of Thrones. Another highly experienced team member is Tony Diioia. He is the co-founder of AMGI studios. With a career spanning four decades, Tony led the charge in creating original content for many character-based entertainment companies.

On the tech side, My Pet Hooligan hired solid developers who previously worked on many crypto and game projects. The person leading the charge in developing the game is Kevin Mack. He is the Unreal Engine director for AMGI studios. His team includes Carl Schembri, West Paglia, and Luke Paglia.

So it is clear that My Pet Hooligan comes with an elite team who are in the NFT space for the long run. Another important aspect of NFT teams is community interaction. My Pet Hooligan team perfectly displays how a team should communicate with their community. They have hosted many AMAs on Twitter and Discord groups, making it easier for holders to understand the updates and what can be expected in the coming weeks. In a recent AMA, the team also showed live multiplayer gameplay. The entire community was amazed after seeing the team’s progress and quality of work.

We have now understood that the team is solid, and they will continue to engage with the community as much as possible, which will likely drive up the demand. But you must be thinking: what makes My Pet Hooligan stand out? Let’s find out.

Why My Pet Hooligan is Miles Ahead than other NFT projects

No, we are not saying My Pet Hooligan is the best collection or can become the next big blue-chip collection. From a utility standpoint, MPH does things we have never seen before. We know that Hooligan holders received FBX files. For those who don’t know, FBX refers to a 3-D model saved in film box format. Users can share the files and use them for animations and content creation strategies.

The team followed the same strategy for their Twitter profile and created many videos using different Hooligan NFTs. This is very important because online content creators can adopt this method of using NFTs to create reels and videos. If that does happen, we will see many more interactive projects that would combine NFTs and music.

We have also seen some behind-the-scenes footage where members of the AGMI studios were doing game testing. It comes to show how fast the team is developing. When we look at other projects promising a game, we always hear some kind of excuse when asked about the metaverse or gameplay. In less than four months after launch, My Pet Hooligan is already on track to release the game’s first version.

NFTs can be scary. 99% of them will go to zero. But you can avoid them by betting on strong teams and communities. My Pet Hooligan has both of those characteristics. Even in terms of a floor price, it has found a stable spot above 1 ETH. And with only 6% of total NFTs listed, a supply shock might be incoming. All in all, My Pet Hooligan has exceeded the expectations of the NFT community, and it is something we should all pay attention to in the coming weeks and months.

If you want to know more about the project, follow their socials and reach out to the community members.

Born and brought up in India, Karthikeya Gutta is a crypto journalist and freelance contributor for ItsBlockchain. He covers various aspects of the industry with in-depth analysis and research. His passion towards blockchain and crypto ecosystem is mainly because he believes it can really change the world and help millions of people.

Lens Protocol is building a blockchain-based open-source social graph to reshape the future of social media in web3. The protocol enables devs to construct social media programs without difficulty. In this manual, we...

NFT Tools can change your Flipping Game. In this article, we have covered the Top 7 tools which can help...

In this Beginner Guide, We'll deep dive into SBTs(SOUL bound tokens), What They are, and how they work. Limitations of...

WTF is an xNFT? And Why Should You Care While crypto markets continue to suffer from rising interest rates and...