Reasons behind Bitcoin sudden drop below 7000$

by Ramaa Mohan
in Cryptocurrency, News
0 0
0

There can be multiple reasons on the Bitcoin sudden drop. After having recovered from a slow month and penetrating the $7,000 USD mark, Bitcoin is again on a downward slump. Late this afternoon, in a timespan of 2 hours, bitcoin has lost $400 USD from its value.

Bitcoin started today at about $7,388.26 USD and maintained value there with no big fluctuations. But at around 15:19 IST is when the drop began.  It went down for the next two hours and finally settled at a value just below the $7000 USD mark. The value of Bitcoin at the time of writing is; $7,010.84 USD.

This slump comes right after the Bitcoin and altcoin market started to show bullish characteristics. The altcoin market is right now recovering from the technical correction that took place last month when the entire market was suffering from major losses.

Most people are saying that this is happening right now because periods of low volatility or stable market trends are usually followed by slumps in the value. Which seems like a very plausible theory at this time because Bitcoin has comfortably been above the $7,000 USD mark for a while now.

This successive liquidation all on the BitMex exchange could be one of the major reasons that the bitcoin trendline plummeted below $7,000 USD, as the pressure to sell was pretty high with these liquidations being processed. 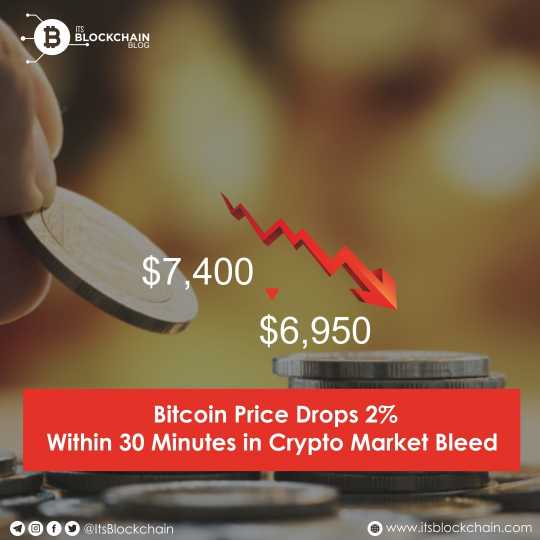 This slump comes only one day after the news of $100 Million USD’s being injected into the market from three different exchanges. This transaction is suspected to have connections with the original Silk Road accounts, but is effectively untraceable because of the methods applied to transfer the money. BitMex is one of the three exchanges along with Binance and Bitfinex.

Either way, the real reason for the slump is not known. And at this point, all the reasons stated above are merely speculative. The price of Bitcoin at the time of writing is; $7,010 USD.

What is Tezos? The Tezos, much like Bitcoin or Ethereum, is a decentralized ledger that utilizes the blockchain technology. And...

Crypto Signals Telegram Channels: Should We Trust Them?