by Karthik Guttha
in bitcoin
0 0
0

It has been one hell of a week. The global affairs surrounding Russia and Ukraine have escalated to unexpected levels, leaving 40+ million people in fear and extreme danger. The President of Russia, Vladimir Putin, has shrugged off any type of diplomatic actions and went on to order a full-on invasion attack on Ukraine in every way possible: land, air, and sea.

As a result, the Russian forces initiated a major assault at key military targets and highly dense cities. We observed bomb blasts near the airport in western Ukraine and dozens of tanks marching towards Ukraine’s capital. Now, it has been reported that the Ukrainian army destroyed 20 enemy tanks in the Chernihiv region after declaring martial law.

There have been many more horrific instances over the last week that might make you think — are we really going to have world war 3? It is undeniable how bad the situation is right now, but we still haven’t seen a first-world country like the United States intervene in any way. They have issued sanctions that would target Russian banks and their ability to make international trades in dollar value.

Along with the US, Britain, and Europe have taken strict measures to cut-off western financing for Russia. The experts believe these sanctions will have minimal impact in the short term, as the Russian state banks reduced exposure to foreign currency. However, Russia still has a surplus of $300 billion in offshore accounts. According to Zoltan Pozsar, an AG strategist for Credit Suisse, the majority of liquid wealth owned by Russia is denominated in U.S. dollars.

So, if Russia uses foreign currency to avoid sanctions, it would lead to a panic crash that could potentially shift the market structure. And no one would see it coming. In this article, we will be diving into the market reactions to the Ukraine-Russia tensions and understand how bad this could turn out to be for an average investor and trader. Read till the end to take action!

How are Markets Reacting

When something like war becomes an everyday topic, you know people are panicking and worrying about the future. As a result, this fear will reflect directly on markets all across the board. And that is exactly what happened.

We can call it a correction or a panic crash tipped off by the Ukraine-Russia tensions. We must not forget rising interest rates and FED’s announcement about monetary tightening. So the markets were bleeding in a very bad way for weeks now. But when President Putin tore up the peace deal, it caused chaos in the global markets. The Indian markets lost nearly 10 lakh crores in value. The S&P 500 also crossed a notable support threshold. It fell to 4,155 on 24th February.

Like gold and other commodities, the risk-off assets showed great strength, with Aluminum hitting a record high and Platinum jumping more than 2%. Gold, the most-trusted inflation hedge asset in traditional markets, also made massive moves, hitting $1973, the highest level it has ever reached since Sept 2020.

As Russia is one of the largest oil producers, the war tensions also impacted oil price. The cost per barrel traded above $105, making it the first time since Russia invaded Ukraine in 2014. Though the markets realized the supply issues are no longer a massive problem and prices fell below $100, there is still uncertainty about how Russia plans to import oil after getting sanctions. Some believe that even if Russia stops importing, cross-border dealers will still be selling for much higher prices. So, essentially, Russia is profiting from their invasion attack.

After the markets settled, we observed a relief rally across all markets. The S&P is now well above 4,375. And the Indian Sensex is up over 1500 points in a single day.

That is for macro equities and commodities markets. Now, let’s get to crypto. We know it’s the most volatile market. If equities fall by 4%, crypto-assets fall by 16% (just an estimate). Over the last week, major sectors in crypto were hit hard, leaving the industry with a $300 billion hole in terms of market cap.

According to Messari, the most affected sectors are web 3, blockchain gaming, and DeFi. The least affected are currencies, smart contract platforms, and top cryptocurrencies. 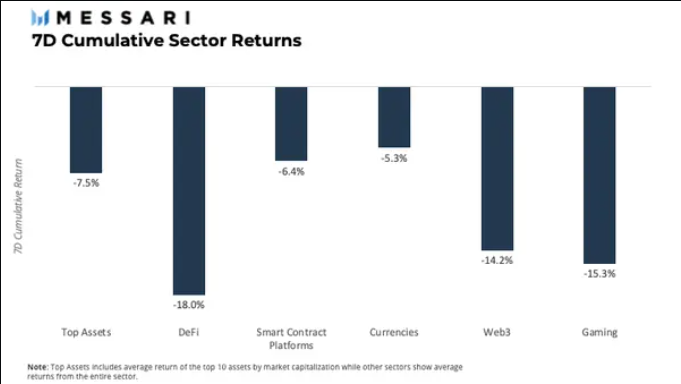 While the market was expecting further downside, whales stepped in and placed bids. This initiated a reversal from low 30s to highs. The leading asset that broke out first is Terra. Ethereum and Avalanche also had a major run up after the sudden crash.

What Does On-Chain Say

The market reactions never give us the full picture of what actually happened. To understand that for crypto markets, we need to use on-chain metrics. These metrics allow us to check how healthy the bitcoin network is and what the entities are doing in real-time. Let’s see some of the impact-driving metrics.

One of the major factors that caused multiple corrections over the last couple of months is high open interest. When many market participants are trading with high leverage, they can easily be liquidated, causing extreme volatility. The direction of the volatility cannot be defined, as there is a short for every long.

Now, the current open interest is still high and very troublesome. Only the late shorts came into existence after Russia’s invasion was crushed. We still need to see these leveraged traders flushed out, reducing OI significantly. However, that is not what’s happening. Over the last two months, the OI has been going down slowly, compared to its usual liquidation cascade.

Will Clemente, an on-chain analyst for Blockware Intelligence, put together the following chart, representing the dry power ratio. In his tweet, Will mentions this ratio is between the amount of stablecoins on exchanges and bitcoin’s market cap. He further says, “Dry Power Ratio is at an all-time high, this shows there’s a lot of dry power ready to be deployed.”

This is an important metric because it helps us understand how much capital is sitting on the sidelines. Once the markets show signs of relief, we may see new capital inflows.

When miners sell bitcoin, it means that they are unable to bear the cost of mining operations. This kind of activity also initiated a sell off in late 2021. But that’s not the case right now. We are seeing continued growth in miners wallets, who are showing conviction and accumulating at these low price points.

The strong hodling behavior displayed by long-term investors can be seen with the help of dormancy flow charts. When a coin is not spent or moved, then it is said to be dormant. The more days coins stay dormant, the higher their conviction towards that asset. In the case of bitcoin, more than 75% of the supply hasn’t moved in at least 6 months. This is a new record. From a network standpoint, it is a positive sign but doesn’t mean much in terms of price action.

What should be your action plan

After observing the global affairs and market reactions, I hope you understood that there is certainty about uncertainty in the financial markets. Moving forward, it is crucial how investors and traders manage their risk profile and make adjusted bets to see continued growth or prevent losses to their portfolio. Let’s look at two scenarios or action plans for the next 12 months or a bear market.

People who make a living off trading and never experienced a full market cycle need to have 50% of their capital in stablecoins. The rest should be equally allocated between Ethereum and bitcoin. As we have seen in previous market cycles, there will always be a small period of up-only market movements. This mini bull cycle can turn out to be beneficial for traders. At the same time, they should also accumulate two or three altcoins that can outperform the entire market. This is not recommended for everyone. It takes high conviction and skill to execute such trades.

The best option for investors with a long investment horizon is the dollar cost average. Remember: no one has lost money if they held bitcoin for more than 3 years. So people who have other sources of income and don’t need immediate liquidity can start accumulating fundamentally strong projects. If you want to know which coins can make a strong comeback, you can consider technical indicators, such as weekly reversal candle structure, bullish RSI cross, and golden cross.

Everything depends on how this war ends and when

Though this is not another pandemic, the markets can react violently if Russia-Ukraine tensions continue to go out of control. We need to closely monitor the situation and understand how it affects global equity markets. Once the equities show strength, there is a strong chance crypto will come back. The correlation can only get us so far. We still have to claim back the bull market support band at $53k. There are many high-level resistances that bitcoin needs to overcome to get there.

All in all, the markets are looking shaky with rising investor fear. If you are a trader, you can leverage short selling to benefit off the downfall. If you are an investor, consider accumulating or waiting it out.

Born and brought up in India, Karthikeya Gutta is a crypto journalist and freelance contributor for ItsBlockchain. He covers various aspects of the industry with in-depth analysis and research. His passion towards blockchain and crypto ecosystem is mainly because he believes it can really change the world and help millions of people.

A trillion dollar tsunami is about to hit Bitcoin

The fierce rivalry between boomers and millennials might soon end up benefiting Bitcoin. A report from CoinShares, a digital asset...