As Bitcoin shot past its sluggish month by breaking the $7000 USD barrier, many other coins too saw their prices go up. Being the first and largest cryptocurrency in the market, what happens to bitcoin has a sway on what happens to the other coins.

So while Bitcoin saw a rise of about 10% in a short period of time, Stellar, the only printed cryptocurrency, saw a hike of about 30%. It rose past competitors Litecoin, which is a decentralized mineable coin by market capitalization, to obtain the 6th position in the list of crypto coins.

As soon as this rise was announced and changes were reflected on coinmarketcap, it sparked a debate over whether Stellar can be actually called a cryptocurrency with a tweet from the founder of Litecoin partially congratulating Stellar and partially dissing it.

Congrats to Stellar on passing Litecoin’s marketcap. That said, it really doesn’t make sense to compare marketcaps of coins that are “printed”, b/c they have an inflated marketcap. Maybe I’m old school, but I only care about decentralized mineable coins.https://t.co/n6va1YWoiD pic.twitter.com/4IMJ7iqg3H

Lee, along with a lot of people in the cryptocurrency market, believe that these ‘digital currencies/tokens’ should not be put into the same race as that of actually decentralized mineable coins. And he also believes that coinmarketcap’s method of ranking coins and tokens based on their market cap is a little flawed when these two very different types of coins are in the same race because ‘printed’ cryptocurrencies naturally have a slightly inflated market cap.

After making his discontent with coinmarketcap’s ranking criterion, he went on to post a ranking list after having removed all of these ‘digital assets’, with Litecoin again in 4th place, only behind Bitcoin Cash and Ethereum. 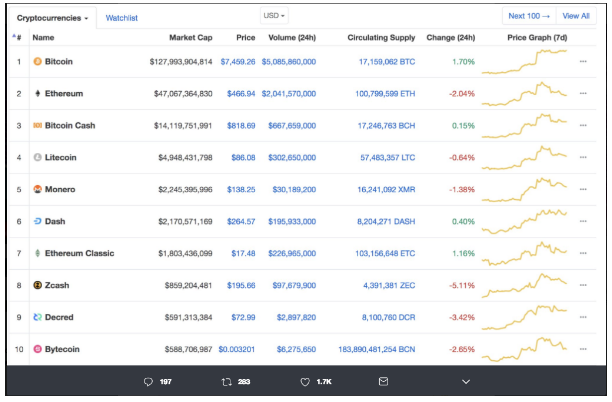 If this issue must be looked at historically, then it is a commonly known fact that the market capitalization is no way to judge coins. Especially when wide categories of coins are put into the same pool.

The biggest difference between Litecoin and Stellar is the fact that Litecoin is mineable. And mineable cryptocurrencies when pit against ‘digital tokens’ are at a slight disadvantage because their market capitalizations are not inflated as is the case with ‘printed’ cryptocurrencies.

However, regardless of how that may be, for now with no filters applied on coinmarketcapital, Stellar, a ‘printed’ cryptocurrency, has surpassed the world’s 4th largest cryptocurrency; Litecoin, in terms of market capitalization.

ATOM 2.0 Tokenomics will change the future of Cosmos hub and its native token. In this article, We'll deep dive...

Cryptocurrency came on fast and furious and surprised financial experts, governments, and users alike with massive fluctuations and outstanding climbs...

In our previous on-chain market analysis, we mainly discussed that bitcoin needs to reclaim the $53k level, which is the...