What type of blockchain to use?

by Hitesh Malviya
in General
0 0
3

Now we all know, Blockchain implementation will reduce the cost of those business which relay on third party for assets clearance.  But when you made your mind to implement blockchain or build something on blockchain, An other question arises? What type of blockchain to use. That’s another confusing thing. We will cover today about types of blockchains. Three main types of blockchains exist: 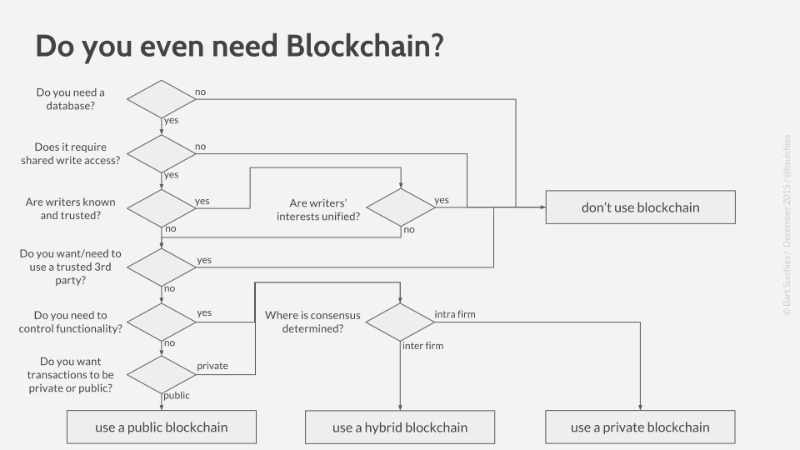 “If you are a startup/company or bank which wants to use BTC or Ether currency as digital token, Go with Public Blockchain.”

Consensus process is controlled by a pre-selected set of nodes; for example, one might imagine a consortium of 15 financial institutions, each of which operates a node and of which 10 must sign every block in order for the block to be valid. The right to read the blockchain may be public, or restricted to the participants.

“If you are a large enterprise or financial institutions, wanted to build your own currency, Go with Public Blockchain.”

Write permissions are kept centralized to one organization. Read permissions may be public or restricted to an arbitrary extent. Likely applications include database management, auditing, and more that are internal to a single company, and so public readability may not be necessary in many cases at all, though in other cases public auditability is desired.
Examples: Eris Industries, Multichain

“If you are a startup, wanted to build your virtual currency, wanted to control write permission on blockchain, Go with private blockchain.”

Sidechain has emerged as new kind of blockchain, Read to know more.