Who controls the Bitcoin Core? And it’s not Wladimir J. van der Laan

So a recent thread on Reddit raised the question of who is actually in control of Bitcoin Core; the code repository of the world’s first and largest cryptocurrency; Bitcoin. The Bitcoin Core code repository is the direct descendant of the original code that was made and released to the world by Satoshi Nakamoto. 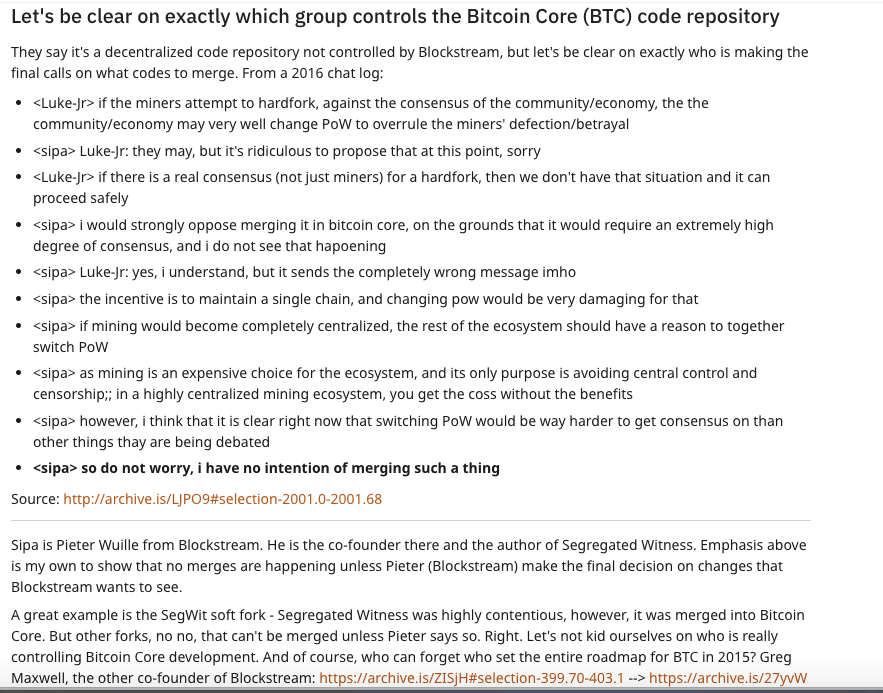 Subsequently, many people point out that it is an open source software and anybody can contribute to it. But the question raised here is an important one, who does run Bitcoin Core? Who controls it and who are the biggest contributors?

Bitcoin Core is an open source project, whose code repository is stored on GitHub. It periodically maintains and releases the underlying client software of Bitcoin for and to the world. Bitcoin Core’s lead developer is a coder called Wladimir J. van der Laan, who took over the position in Bitcoin’s early days, back in 2014. He has been said to be the shot-caller.

According to the messaging conversation the Redditor uploaded from his handle, Pieter Wuille from Blockstream, who is also the author of Segregated Witness, makes the final call. And that no merge, hard or soft fork can happen without his blessing and full support.

Now of course, how true this is and how trustable the conversation that has been posted is, is debatable. But in theory, the Bitcoin Core repository is an open-source repository which means anybody can contribute to the code base and accepts monetary contributions from everyone.

Bitcoin Core has no official organizational structure or established hierarchy, so new ideas and forks are made on the basis Bitcoin Improvement Proposal, which are the same as open for public comments. Once the proposal is made, it is put to a vote through a vetted email list and based on the written support that the idea gets back, it is instituted or rejected.

Here the thing is, this conversation that the Redditor posted is that it raises the question on the Bitcoin Core’s hierarchy. But the fact that there is a hierarchy at all in the Bitcoin Core team is against the core principle of Bitcoin’s peer-to-peer and consensual core values.

With Bitcoin Mining Capitulation Coming to an End, Will Halving Pump Begin?

Bitcoin hash-rate recovery is underway and we can expect a buy signal post the miner capitulation soon. However, the...

In this article, we will look at Technical Indicators which suggests Bitcoin can crash below 7000$ in the next few...

Why is Bitcoin a safe haven in a financial crisis

In this article, we will discuss Why Bitcoin is a safe haven and how it can perform during the next...

How to Make Money in Crypto When It Falls

For anyone who finds themselves frustrated with the lack of growth in Bitcoin and other coins over the last year,...