Your cryptocurrency can save the one horned Rhino from extinction

by Hitesh Malviya
in Cryptocurrency
0 0
0

The Kaziranga Wildlife Society from Assam, India, needs donations to rehabilitate the endangered one-horned Rhino after the worst floods in the last 20 years in the region. They need 2.875 BTC. Details of authenticity, the point of contact and use of proceeds below. 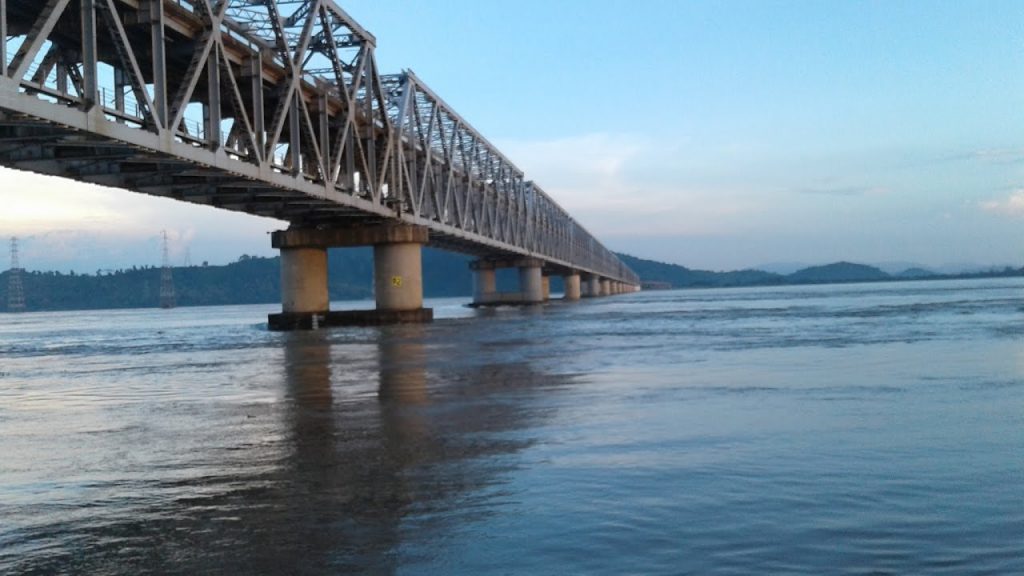 The Brahmaputra is one of the most violent rivers in the world. Constantly changing tracks and wiping out entire villages in the northeast of India, is commonplace during the rainy season. However, it’s the flooding that always causes the most amount of destruction. See, the Brahmaputra, at its shortest, is 7 kilometres wide (about 4.3 miles). At some points, it goes up to 40 kilometres in width (about 25 miles). And when it floods, the entire width of that river, over the length of some 3000 kilometres rises by up to 90 feet. This sends the river banks and the low lying areas into pandemonium every rainy season.

It is a sight to behold and there are massive losses incurred by the people and the devastation leaves hundreds of people and animals dead in its path.

This year was different though. There were 2 waves of floods that were really intense, even by Brahmaputra standards. This was the worst flood to hit Assam in the last 29 years. Close to 200,000 people were displaced and the Army had to be deployed for relief efforts. But the focal point of this flood was the Kaziranga National Park.

Kaziranga – A Safe Haven for the endangered, underwater. 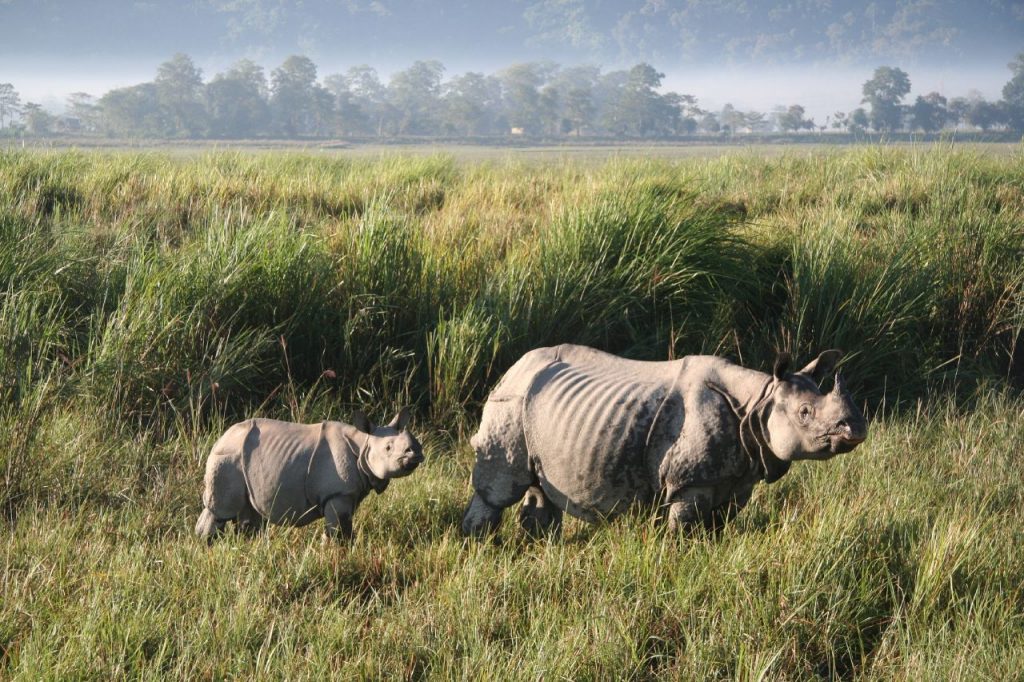 The Kaziranga National Park is a Unesco World Heritage site, one of India’s biggest national parks, and home to 35 mammalian species; 15 of them are endangered. It houses 70% of the population of the Indian one-horned Rhinoceros and contains large populations of the Asian Elephants, Asian Water Buffalo and the rare swamp Deer. It also holds the unique distinction of being home to 3 large cats – the Bengal Tiger, the Indian Leopard and the Clouded Leopard.

The floods were particularly harsh on Kaziranga. A reported 70% of the national park was under water and the devastation was widespread. According to the State Forest Department, about 350 animals, including 26 one-horned rhinos, five elephants, a tiger and more than 250 deer perished in the world-famous Kaziranga National Park and Tiger Reserve during the recent waves of the flood. However, local NGOs claim more than a thousand animals died in the two waves of floods, especially the second wave that surpassed the record of 1998. The government list has not taken into account lesser wildlife like wild boar, porcupines hog badgers, foxes or even gaurs (Indian bison) and wild buffaloes. More carcasses were found floating once water levels receded while rescued rhino and jumbo orphans were sent to the rehabilitation centre. 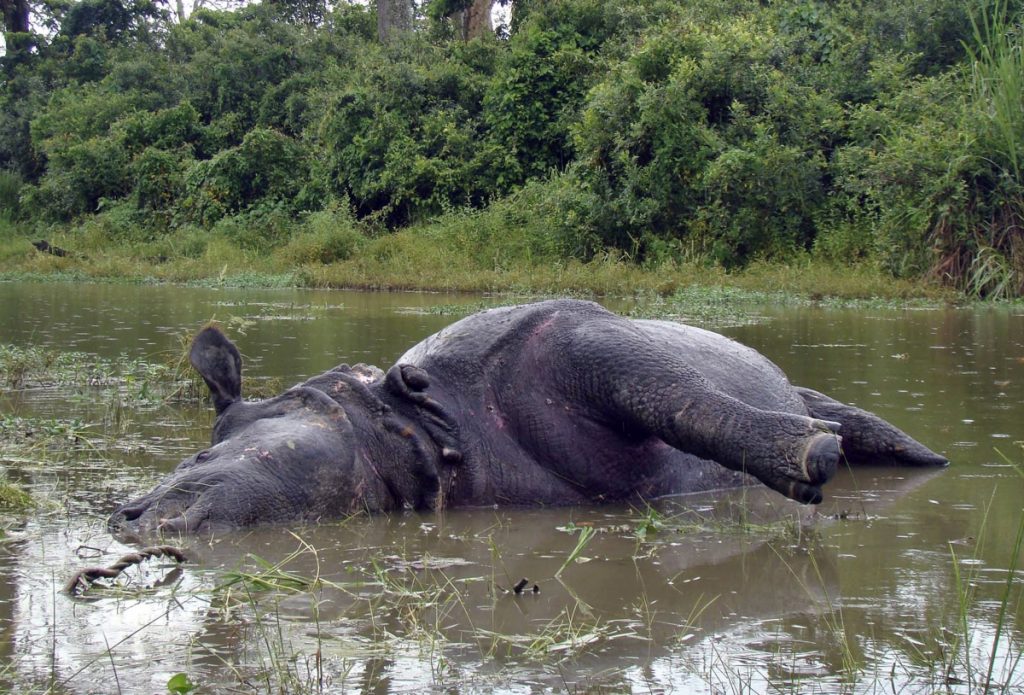 The Indian government has organised relief efforts to ensure that the people of Assam are provided for. The Indian forest department continues to fund and work with their team of forest rangers and rescue officers to rehabilitate the displaced wildlife. There are multiple NGOs working with the locals who live in the Kaziranga region to ensure that the forest dwellers and the tribals and taken care of.

With the floods now receding, more relief effort is coming into the region. Given the human devastation due to the floods this time around, there is more focus on helping the people and the animal relief efforts are being neglected. However, there are some NGOs that are helping out specifically for animals.

We were contacted by the Kaziranga Wildlife Society, who told us the plight of the people and animals in the flood-affected areas. This isn’t a one-off in this region. Constant lashing from rain and floods have made people immune to a lower standard of living and constant ravaging by disease. The authorities also have a shockingly apathetic view of this yearly phenomenon.

Furthermore, the news media doesn’t cover the full extent of the damage. There are people inhabiting parts of Assam with limited access to transportation. The only ones who can help them are local NGOs who work tirelessly throughout the year to give them the support they need.

Although the name says non-governmental organisations, they are very much a part of the locals’ support system in these remote areas. Many NGOs in Assam work in tandem with the government and respond when rapid action is required.

The Kaziranga Wildlife Society, for example, works with the Centre for Wildlife Rehabilitation and Conservation (CWRC) at Panbari, Kaziranga, and supports at least one rhino calf for a year at the CWRC, orphaned by last year’s devastating flood.

However, this sort of animal care requires huge amounts of funds and despite local support from patrons, these NGOs always run out of money. The story is no different with the Kaziranga Wildlife Society.

Saving the One-Horned Rhino with Crypto

Every animal in the wild has a role to play in the food chain. If the tiger goes extinct, the herbivores’ population goes unchecked. This means further loss of vegetation. This results in deforestation, which in turn erodes the topsoil. Furthermore, the lack of roots, which would otherwise hold and retain water, will cause floods and landslides.

A lot of us have made some profits by investing in cryptocurrency. Many say that if you own 1 BTC, you’re already in the richest 1% of the world. As we grow richer, it falls on us to give back to the world. And we at ItsBlockchain believe that this is a cause worth donating.

Disclaimer – This wallet was created by the ItsBlockchain Team. All of the collected proceeds will be declared and given to the Kaziranga Wildlife Society in its entirety minus exchange rates.

Think about it. All it takes is about 3 BTC to set a whole community right and potentially save an endangered wild animal. And among us, we can easily raise this.

ItsBlockchain vouches for the sincerity and authenticity of the Kaziranga Wildlife Society. Check out their website and social media pages.

Our point of contact is Mr Jayanta Kumar Das, who is a key member of the Kaziranga Wildlife Society. He will be the point of disbursement of all the donated funds. He will continuously update the use of funds via email and social media to all donors.

We want to be able to help as many causes around the world through the power of cryptocurrencies. Being able to easily raise and send money to the people who actually need is powerful. However, it all starts one step at a time. Let’s help the Kaziranga Wildlife Society save the animals and people from the horrors of the flood.

Donate to help save the one-horned Rhino – 1CuD86bRnDmvBDEJJp6HV5J4utysCHhkwY 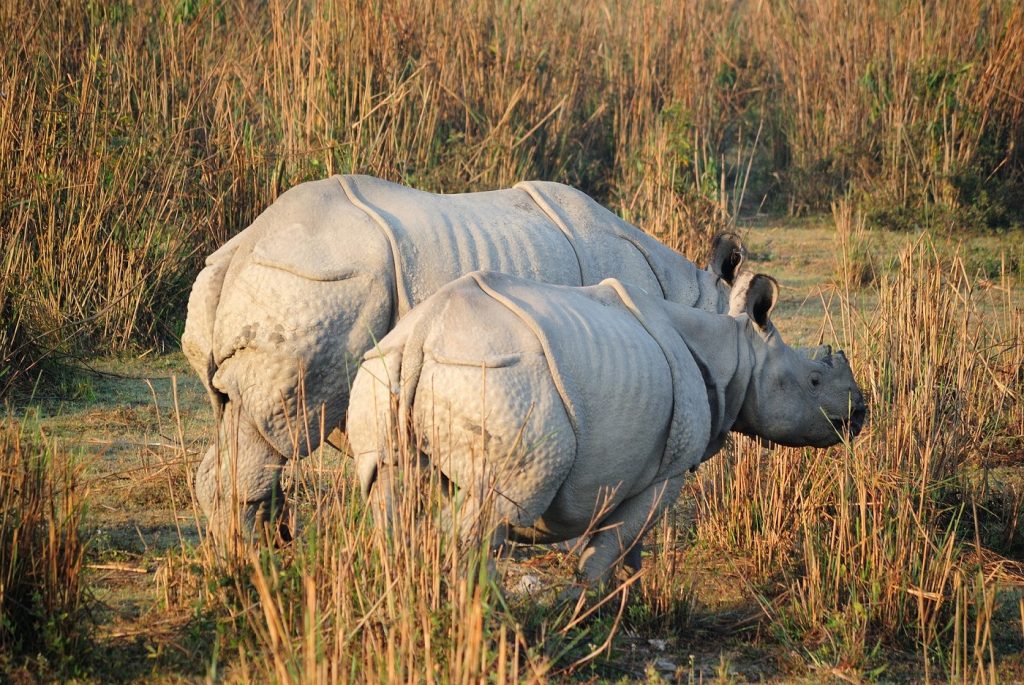 What is Tezos? The Tezos, much like Bitcoin or Ethereum, is a decentralized ledger that utilizes the blockchain technology. And...

Top 4 Cryptocurrency Brokers You Should Know About The treasure trove of $1.15 Trillion worth of Bitcoin is the welcome...

ADA is One of the Most Decentralised Cryptocurrency in the World Right Now with 98.5% of Supply being Distributed among Retail Investors

A Detailed Overview of EIP 1559: What to Expect

Be warned! Hackers are abusing API keys and stealing your funds

Mistakes to Avoid When You Want to Earn Crypto Interest

Bull Perks: The fairest and most community-dedicated platform giving access to early-stage deals

Stop this FUD- No bitcoin wallet was hacked, nor even known to be possible.