The cryptocurrency market is flooded with new projects everyday. Projects that promise to further the current capability and potential of the existing blockchain. These projects, apart from being advancements in the technology, they are also investment options. The better the project does, the better the investment does.

Two such projects that deal with blockchain protocol are Edenchain and EOS. in this article we will discuss both projects separately, evaluate their features and stress points and then finally compare them with each other.

Edenchain is a permissioned blockchain protocol that deals with increasing blockchain capability. Edenchain focuses on real-world use-cases of the blockchain and furthers its capabilities with them in mind.

The three areas that Edenchain is focussing on are;

Scalability is a problem that all versions of the blockchain face. For blockchain to be able to take up the workload that it is expected to in the event of the world going decentralised scalability is something that needs to be worked on.

The current market is not even at half the traffic and is already fraying under the trade volume. Edenchain’s solution to this particular problem is to take the transactions and make their computing parallel. Using namespace technology, Edenchain aims to take transactions and allow them to grow linearly. Which in turn increases the scalability of the blockchain through the Edenchain protocol.

Another major problem that is faced by blockchains in the current market is that they are all separate chains working in isolation. There is no medium that allows these chains to work with each other nor is it easy for chains to communicate with the currently available technology.

To tack this particular problem Edenchain’s solution is to harness the power of the smart contracts and make it easier and more secure for individual chains to interact with other chains and external data modules.

The cryptocurrency market and the blockchain industry are a very niche space at the moment. It requires immensely sound technical knowledge to understand and high technical skills to implement. It is not easy for businesses that are not tech centric to adopt the technology without shelling out money.

To tackle this monopoly that the technically sound have over the blockchain industry, Edenchain is making their platform and protocol very user friendly. They are also using RESTful API to make it easy for businesses to integrate their existing systems with the blockchain.

The platform and protocol have a specific native token that will be used on it. The token is called EDN. EDN’s current value is $0.037 USD. Edenchain is a South Korean startup. Its founder and current CEO is James Ahn.

The three areas that EOS is focussing on for their protocol are:

Scalability is a problem that both the protocols have in common. They both are trying to increase the scalability of the blockchain which currently runs about one tenth the required transaction rate for it to take over the current financial industry’s load.

EOS plans to do this by making its protocol differentiate between authentication and processing. Another important feature that the EOS platform has included into making the platform and protocol more scalable is inter chain communication.

Usability is an issue with all things blockchain because it is not the most intuitive or easy to learn. To tackle this particular problem, EOS has implemented a user interface that is easy to understand without having to know how the platform works and has also instituted buttons and features that are self-describing in nature.

Thereby making the platform easy to use and makes it more accessible to people in the industry. 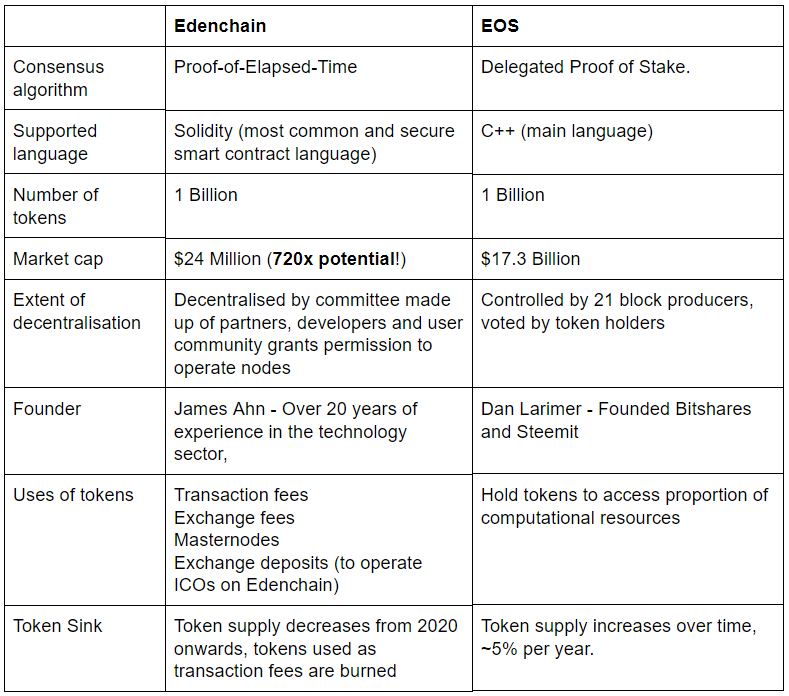 Overall both projects are well equipped to achieve what they have set out for themselves. The only major difference here is the consensus algorithm that they have respectively chosen. Other than these minor technical differences between the projects, the end goal of both projects are the same. They both want to further the capabilities of the blockchain and make it more scalable, accessible and usable.

The deciding factor, however, between these two projects are the people involved. The company’s team and the community that will eventually use the platform and protocol.

Edenchain is a relatively very fresh project, unlocked their tokens yesterday and currently trading at 0.04$ on IDEX and other two markets. We can expect a good growth in the value of eden coin in near future.

Also, Read Everything you need to know about EOS Mainnet