by Ramaa Mohan
in News, Uncategorized
0 0
0

Bitcoin and Ethereum investors from four states in the US can now trade for free. Robinhood Financial, an online brokerage, has announced their commission-free trading for Bitcoin and Ethereum as they had promised a couple of weeks ago. The states that will benefit from this announcement are; California (where the company is based), Massachusetts, Missouri, and Montana.

This announcement from Robinhood crypto gives the company a good competitive edge compared to the other hundred exchanges that already exist. They are now competing with the leading exchanges in the market, for example, Coinbase; an exchange that has 20 million users. The transaction fee for Coinbase users is between 1.5% to 4%.

After the announcement was made there were millions of users that wanted to test it out immediately. And there were a few kinks and roadblocks that some users faced on the site, however, the transactions that were made using their Android and iOS mobile applications went through flawlessly. And the problems have been fixed, since then.

Robinhood revenue model relies on the interest benefits from its users’ accounts and the package based subscription fee that they charge from its users to upgrade to different tiers of their platform, unlike other exchanges that generate revenue from levying a transaction fee. Robinhood Gold is the topmost tier available right now and Robinhood Gold customers have access to loan funds for trading.

Also, unlike other exchanges, Robinhood doesn’t only deal and offer cryptocurrency services, it also deals with the stock market investments, so cryptocurrencies aren’t their only revenue source.

The announcement, that was made on Twitter, was plagued with questions of when they would start offering these services to the rest of the states and whether they would extend the offer to altcoins as well. To which, the reply was that the ‘roll-out’ of this offer would be gradual and eventually the exchange would be adding more altcoins, but not immediately. 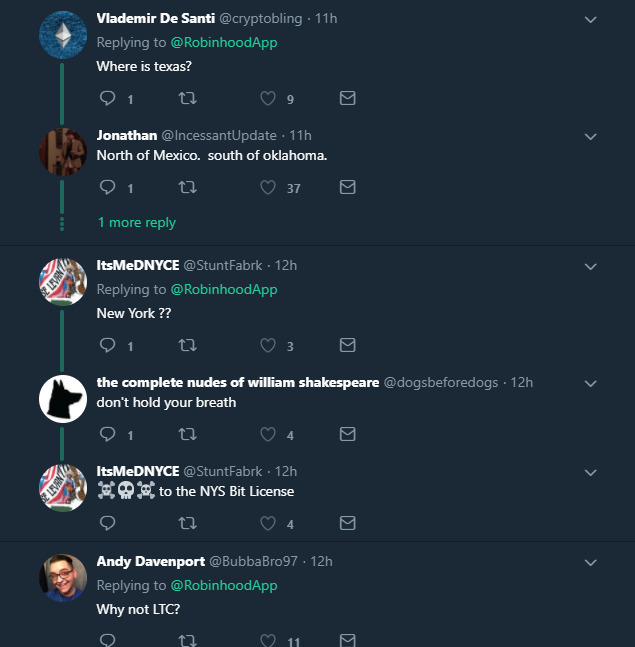 Investors that want to take advantage of the lack of transaction fee are limited to using only Bitcoin and Ethereum, but that may be set to change soon as Robinhood has expressed interest in adding more and more altcoins. However, whether Robinhood will have zero transaction fee for them still remains unclear.

For up to date technical analysis and trends, follow us here – https://t.me/Itsblockchain