Why you should buy DENT

Nowadays, along with three basic needs; food, water and shelter, people now have added the internet and by extension mobile data. Telecommunication companies across the world have made data packs accessible to all consumers by making them ultra affordable. But the problem with these per GB pricing is that a lot of the time the amount of data you’ve used isn’t the amount you paid for, but because the pack is only valid for a certain amount of time, the pack expires and the leftover data goes to waste.

The number of GB’s of data that go to waste like this across the globe runs into millions per month. What if that could be fixed? What if that leftover data could be repurposed and you could make money off of it? This very problem statement is what DENT Wireless Limited, a startup based out of Hong Kong, is trying to solve with its data marketplace.

DENT Wireless Limited’s project, which is also called DENT, is out to revolutionise the mobile data market of the world. The DENT exchange is essentially a transparent, easy to use, one interface marketplace where people can buy, sell and donate data that is of no use to them.

The problem with data packs that telecommunication companies offer their consumers is that they are fixed and the usage trends of a customer, though can be predicted, sometimes varies, putting them in a position where they need more or in a place where they could have used less than what they paid for. To cater for both these situations in one shot, DENT has created an exchange platform where people can buy data when they need more, sell when they need less and donate when they’re feeling generous.

Being a marketplace for unused data, DENT basically makes sure that the control over where and how much data a consumer requires and will use is in their own hands. Because the left over data situation that the world faces right now benefits no one in particular, apart from the small margin of extra profit the telecommunication companies make with the money they recieve for more data and less use.

While the idea may seem simple enough, because this is probably something that the entire community would want to get involved in because it is a fact of the world right now that access to internet is everything, the execution is not so simple. The telecommunication industry is an age-old industry, with set plans, guidelines and very little room for flexibility as most industries of its size, age and demographics are. The implementation of the idea that DENT is proposing is quite tricky.

Here are three main things that the company is currently focussing on.

Mobile network operators have a fixed number of data plans that they offer their consumers. While these data plans are competitively priced and easily accessed they are still quite rigid and more times than one, the consumer ends up paying for more than what they need or ends up getting lesser than what they want.

When the first of these two scenarios take place, the consumer is at a loss because they could not finish their pack and within a set duration of time, the pack expires. In the second scenario, the consumer has to wait for the new cycle to begin or start a new one, disrupting the previous pack.

In order to alleviate these factors from the mind of the consumer, DENT has come up with the exchange solution in which the consumer can buy, sell or donate data as and when it is required not having to worry about falling short or over-spending. Thereby liberating the mobile data consumer from rigid plans that may or may not fit the bill.

A very common problem with people who travel a lot is that they are charged extra every time they travel to a different telecommunication circle. These extra charges apply to both data as well as telephonic calls and are becoming irrelevant to the market because everyone travels and calls and internet are essential now.

With this in mind, DENT, obviously, wants to be a global player. In order to be one, especially in the telecommunication market, it involves deals and partnerships with telecommunication sectors across nations and making sure that the data that is available on their market is useful and usable by all participants of the market.

In order to be able to achieve this, the telecommunication industry’s long set rules for national and international roaming must be scraped and abolished. This is literally the most ambitious goal DENT has set for itself as it involves bringing all the telecommunication players under one umbrella and essentially forcing them to work together.

This is the crux that the entire project rests on. DENT Wireless Limited in order to facilitate the aims and goals of their project DENT has to work in accordance with the telecommunication industry to enable the sale and purchase of data on their exchange platform. This collaboration is beneficial to both parties because it means that at the end of the day the consumer gets the appropriate amount of data at the best price possible.

The cryptocurrency market runs on community appraisal. It is a truly peer-to-peer environment and in order for one to do well, the others have to, too. And companies in the cryptocurrency market are stronger together, which is one of the main reasons that they form partnerships and split amongst themselves the burden of the project and lend credibility to each other. To that effect, the partnerships a company makes within its first five years of existence is what determines whether the company will make it or break it in the future.

DENT Wireless Limited and its project DENT have been in the market since the middle of last year, which means the company is just about finishing its first year. And this first year the company has actually achieved a lot.

To start off with, DENT is a project that runs on the Ethereum blockchain and platform. Along with that it is part of the few handpicked projects on the incubation platform that is allowed to use the Ethereum nodes for its processing requirements. And along with Ethereum’s native currency ETH, DENT is allowed to function too. While this is not really an outward partnership between Ethereum and DENT Wireless Limited, by extending this opportunity to DENT, Ethereum has inadvertently endorsed the project and lent it a great deal of credibility.

Apart from being among one of the few projects that are handpicked projects by the Ethereum network, DENT has managed to strike partnership deals with more than 400 mobile operators in more than 130 countries across the globe. Which in itself is a very large achievement considering the time span in which the company has done this.

DENT is one of the few projects that are handpicked by the Ethereum developers to be able to use its nodes for processing. Along with that its native token DENT is also allowed to use the nodes that ETH uses on the network. Which, for a company that has only been around for a year, is a pretty big deal.

The company has managed to infiltrate the walls of the telecommunication industry by striking long term deals with a bunch of mobile operators and that is thanks to its large community appraisal. 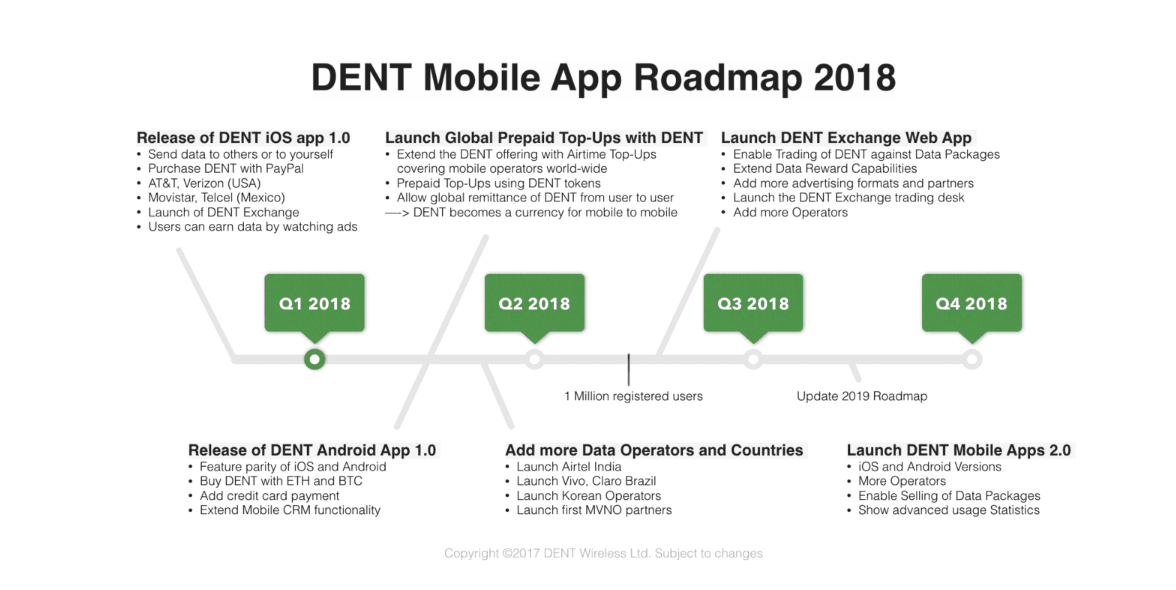 The DENT roadmap that is on their website lists out what they want to be able to achieve by the end of this year, in four phases that are in accordance with the quarters of the year. As the year is in the middle of Q3, it is pretty abundantly clear that the company means business, because it has achieved everything that it set out to with no exceptions. However, no roadmap is set in stone and is subject to multiple revisions and changes, so whether they can keep this rate of growth up is something to be seen over the next quarter. Regardless, great things are expected from this company and its project.

DENT Wireless Limited’s native currency is called DENT. It is a utility token that adheres to the ERC20 Standard as it is required to because it runs on the Ethereum Blockchain and its current value is; $0.0017 USD. Here are the trends from the time the coin hit the market, last year.

The highest value the token has ever held in the market was in the middle of January when the token was valued at around $0.08 USD, but has since been on a downward trend with the occasional short-lived spike here and there.

With DENT now having hit the Android Playstore and Apple’s iOS store, the price of the token is expected to go up soon. And with the company striking more and more partnership deals with players in the telecommunication industry, it is just a matter of time till the token value goes up. However, the price prediction for the rest of this year is approximately between ~ $0.50 cents to $1 USD.

ATOM 2.0 Tokenomics will change the future of Cosmos hub and its native token. In this article, We'll deep dive...

MetaOasis is the next-generation game publishing platform linking Web2 and Web3. Based on the Avalanche chain, MetaOasis reduces users’ learning...

Acardex decentralized Exchange building on the Cardano network is glad to announce the launch of its ACX token pre sale....

Web3 Reward Economy Is Here— Are You Ready to Take Home Free Money?

Web3 Reward Economy Is Here— Are You Ready to Take Home Free Money? The growth of the crypto industry over...

Is 2022 the Year of Security Tokens? If So, Polymath Is Leading the Race

In crypto, most market participants are always on the lookout for the next big thing. The payout will be astronomical...